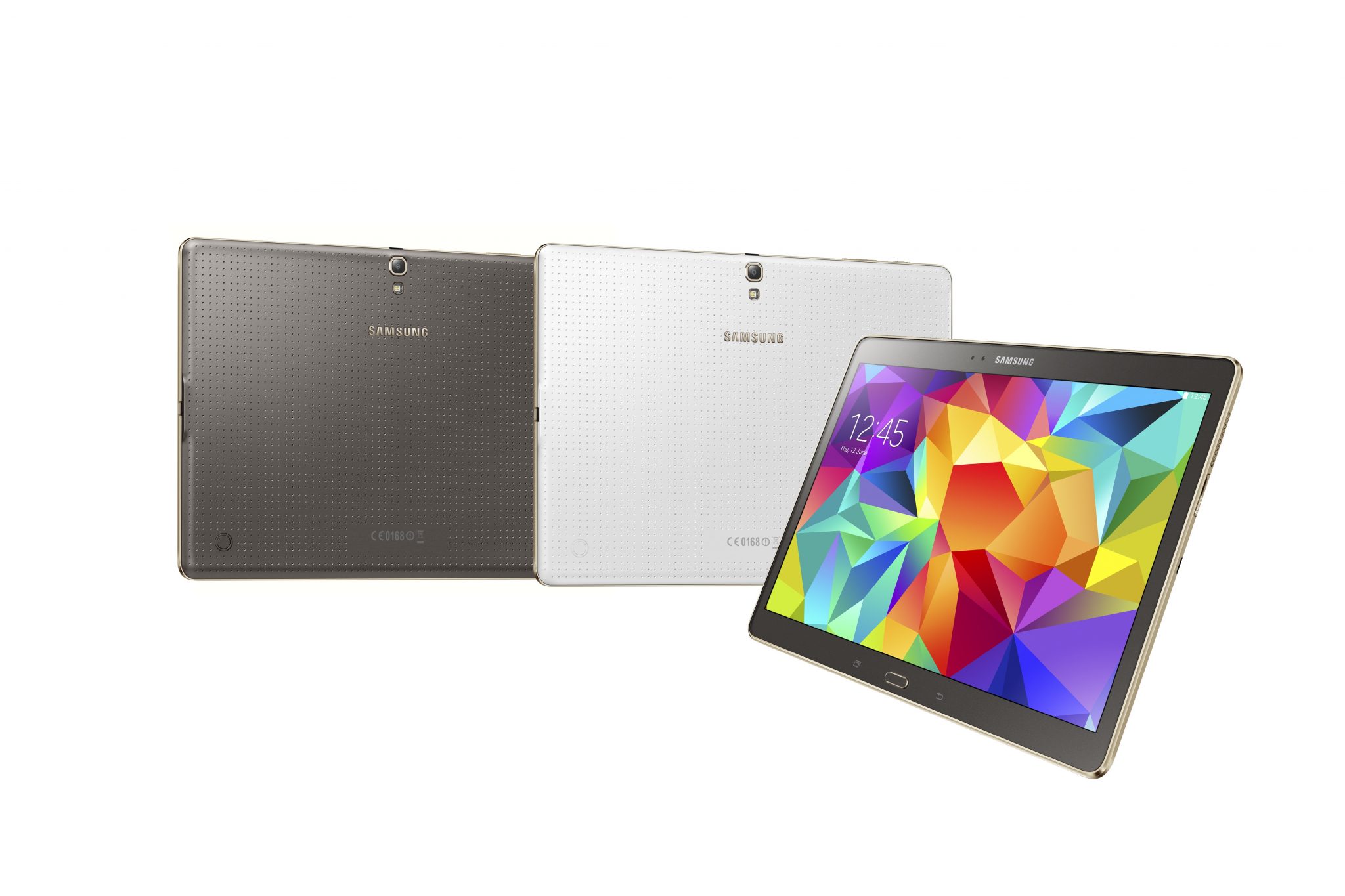 With the amount of devices Samsung releases, the Korean manufacturer could be accused of saturating the market. Sometimes, however, it comes out with a device so good that you forget about the other myriad products that it has released. Remember the Galaxy S3? It was such a massive improvement upon its predecessor and every subsequent Samsung flagship has felt underwhelming as a result.

Therefore, when we learnt that Samsung was launching a new tablet, we were cautious. Then we saw the specs and that initial suspicion turned to cautious optimism. Now, having tested the product, you can colour us impressed.

Samsung has taken its inspiration from Sony by focussing on design innovation in regard to the weight and depth of its product. Despite not being as slender as the Xperia Z2 tablet, this is by far Samsung’s thinnest and lightest tablet ever, weighing in at just 294g.

It does, however, look better than Sony’s counterpart. As is usually the case with its premium devices, the Samsung Galaxy Tab S comes in two colours, white and titanium bronze. We tested the latter variant, which initially seemed a bit flamboyant for our minimal taste but grew on us over time.

The gold-plated edges and brown bezel combine to give the Samsung Galaxy Tab S a copper look. As most tablets come in either white or black this is an unorthodox step to take on Samsung’s part but it sets it aside from its rivals.

The Samsung Galaxy Tab S comes in two sizes (8.4 inches and 10.5 inches) and emulates the S5′s dimpled back cover. Here, however, the back is a darker hue of silver – adding to its titanium-aping aesthetic.

The gold-on-gold portholes and control buttons (which are kept to a strict minimum) also look great. There is a rectangular home button on the front, with touch controls on either side that let you access previously used apps and go back respectively. Overall, its design embraces all the best points of an Android tablet while also bringing to the fore Samsung’s own aesthetic, which was unfairly bashed on its Galaxy S5 flagship but benefits from the larger size of the Samsung Galaxy Tab S.

As you would expect from a top-of-the-range Android tablet, the Samsung Galaxy Tab S handles web and app browsing tasks quickly and efficiently. The slate’s full HD resolution also displays online images with more detail. Consequently, looking at images on Facebook, Twitter, Pinterest and other social networks is enhanced by the device’s display – not to mention the fact that photo albums and images load quickly thanks to its 2.3 GHz processor.

In fact, the resolution on the Samsung Galaxy Tab S is so good (better than the Z2 Tablet and equal to the Google Nexus 10) that it would be a shame if you just used it for those general tasks alone. We put it through a comprehensive gaming test to see if its crystal clear display would be backed up by a powerful processor across the board.

We tried out everything from action RPG titles such as Kritika to popular Google Play games such as Plants vs Zombies 2. Additionally, we also revisited our favourite powerful racing sim; Real Racing 3 and space-set shooter Galaxy on Fire 2 HD. The results were impeccable on each title. Not only did the graphics benefit from the Tab S’ brilliant colour saturation and contrast ratio but all the games performed smoothly, with no lag even on powerful, fast-paced titles.

The same applies to video playback. We found that YouTube videos also loaded quickly over Wi-Fi thanks to the slate’s robust processor. Between watching full HD trailers for colourful animated films such as Disney’s Big Hero 6 or a darker clip for the WW2 epic Fury, the excellent resolution once again proved itself to be the best of most of the Android slates we’ve tested thus far.

The Samsung Galaxy Tab S is a feature-packed Android slate. Aside from retaining the fingerprint scanner that was originally introduced on the Galaxy S5, it also boasts 4G LTE capability on certain models and multi-window functionality.

For those genuinely worried about privacy, the fingerprint scanner is a handy tool. If you’re not accustomed to the function (which is only available on high-end smartphones like the iPhone 5S and Galaxy S5), you simply put your finger or thumb to the home button at different angles for it to recognise your print. Then you can unlock your device using your fingerprint by momentarily placing it on the home button. If you intend to share the tablet with other users on a frequent basis, make sure you use the multi-use feature to create separate profiles.

The multi-window option is a great addition for all the multi-tasking enthusiasts out there. Like you would on a laptop, multi-window allows you to use two different apps or services at once by splitting the screen down the middle. Consequently, you can have your email inbox open alongside the web browser or log in to Google Hangouts for a chat whilst browsing through your image gallery.

You can  access the multi-window task bar by swiping in from the right and then dragging the respective app icons that you wish to use into the centre of the screen. You can also customise the task bar to display your most-used apps.There are, however, a limited number of tasks you can access and you can only operate two apps at a time. We were hoping that it would allow us to access games whilst looking at our emails, but that wasn’t the case.

The camera on the Samsung Galaxy Tab S is a standard 8MP lens, although the front-facing snapper does offer full HD at 2.1MP. Video recording on the device is also full HD 1080p. For anyone who has used a  Galaxy S5 or a NotePro the camera functionality will seem familiar. It boats the same features as other recent Samsung devices, including a range of modes such as panorama, multi-shot and HDR. Additionally the dual-camera function will allow users to simultaneously use the front and rear cameras. Once you’ve taken a snap you can edit it by applying filters and   stickers or cropping it and drawing on it.

The only real issue we had with the Samsung Galaxy Tab S was its problematic battery life. When performing strenuous tasks, such as gaming, the tablet would need to be plugged into a power outlet. Using a USB charger would also take a lifetime for a full charge. The 4,900 mAh battery on the 8.4 inch Samsung Galaxy Tab S is significantly smaller than you will find on larger slates such as the Xperia Z2 Tablet (6,000 mAh) and the 10.5 inch Tab S (7,900 mAh), which is mainly due to size restrictions. Therefore heavy users may be better off buying something bigger.

Recent trends in consumer behaviour indicate that tablets have a longer shelf life than smartphones. Consequently, consumers are holding onto their purchased slates for longer periods before upgrading to a new product. It’s no wonder analysts have announced a slump in the market.

It would therefore be a shame if a product like the Samsung Galaxy Tab S is ignored by an uninterested public and is drowned out by the wave of devices being released by its manufacturer.

Alongside its different sizes, interesting colours and Wi-Fi and LTE options, it’s almost as if Samsung took its prolific approach to hardware and applied it to functionality instead. To say this approach is better suited to the Korean manufacturer would be an understatement. It once again proves that among all the entry-level handsets and flagship variants (some of which serve a purpose), Samsung still has the ability to surprise us with a superior device that stands out among even its vast product lineup.

The Samsung Galaxy Tab S may not be a radical departure from other Android tablets but it encompasses everything that is great about a Samsung product. If, like us, that surprises you then we would urge you to spend some time with Samsung’s new slate – it could end up restoring your faith in the wavering electronics giant.

Although the smaller Samsung Galaxy Tab S may have the odd niggling issue, it still beats other Android slates in most departments. There are slimmer, lighter and larger slates out there but the Samsung Galaxy Tab S has the best display on the market, rivalling even the likes of the iPad and Google Nexus 10. Not to mention it’s great all-round performance when it comes to app and web browsing and its general usability. When a slate boasts functionality this good, you’ll want to use it again and again. Simply put, it’s the best Android tablet on the market.