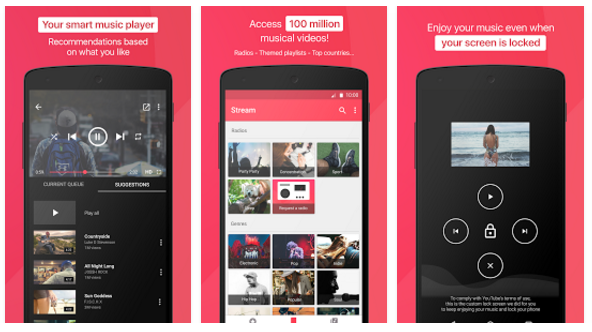 Android developer DJiT has created a YouTube lock screen app that allows listening to music while your smartphone isn’t in use.

If you were one of the early Windows Phone users, you’ll remember the delight of being able to listen and convert YouTube videos to mp3 while the handset was locked in your pocket. It was one of a select handful of things that I genuinely missed during the jump to Android, but now it seems that through the help of a savvy developer, we sort of have it too.

I say sort of because the implementation is not perfect. Android will not allow YouTube videos to play under lock, this is baked into the OS and developers can’t really do anything about it. The guys behind the app have utilised the overlay feature, first introduced in Android Lollipop, to keep the video on the screen, therefore allowing the background audio to continue playing. When the phone is locked, the application uses it’s custom lockscreen to keep the video playing up top, while basic audio controls align the screen underneath.

In terms of the user interface, Stream focuses on the music content that YouTube has to offer and not the video stuff. The home screen has various genre categories and a simple search bar up top, it’s all very minimal and easy to navigate. If you find a track you like, there’s the option to favourite it so that it’s easier to locate later. These can be located in the playlists tab, where you can organise these favourites into specific groups.

The app is currently in beta and can be downloaded from the Google Play Store right now, though you should realise that there may still be a few bugs. We didn’t notice any when during use and have to say that it’s the only application currently available that manages to find a solid workaround for this annoying limitation.

Criminals used Pokémon Go to rob victims
Criminals used Pokémon Go over the weekend to lure unsuspecting Pokémon fans to a certain location, and then robbing them at gunpoint.  Pokémon Go has proven to be extremely popular, with millions of downloads after being made officially available for the Play Store and App Store in: the US, Australia and New Zealand. The new augment reality game encourages users to venture outside to fully […]
Apps - Manny Pham
Top mobile games this week for July 4th – July 10th
Games are one of those addictive little distractions that help us unwind after a busy day. So why not recruit some new ones to get you through the week! Here’s our top mobile games this week for July 4th – July 10th! Pokémon Go (Android and iOS) Price: Free Nintendo’s latest venture into the mobile games world isn’t out […]
Apps - Thomas Wellburn

Here’s a sneaky way to get Pokémon GO now
Need Pokémon GO now? Well you’ve come to the right place as we’ve figured out how to download the new augmented reality game. Pokémon GO is rolling out now for the App Store and Play Store, but not every country is seeing the game appear on their respective stores. Prospective Pokémon masters in the US and Japan are […]
Apps - Manny Pham