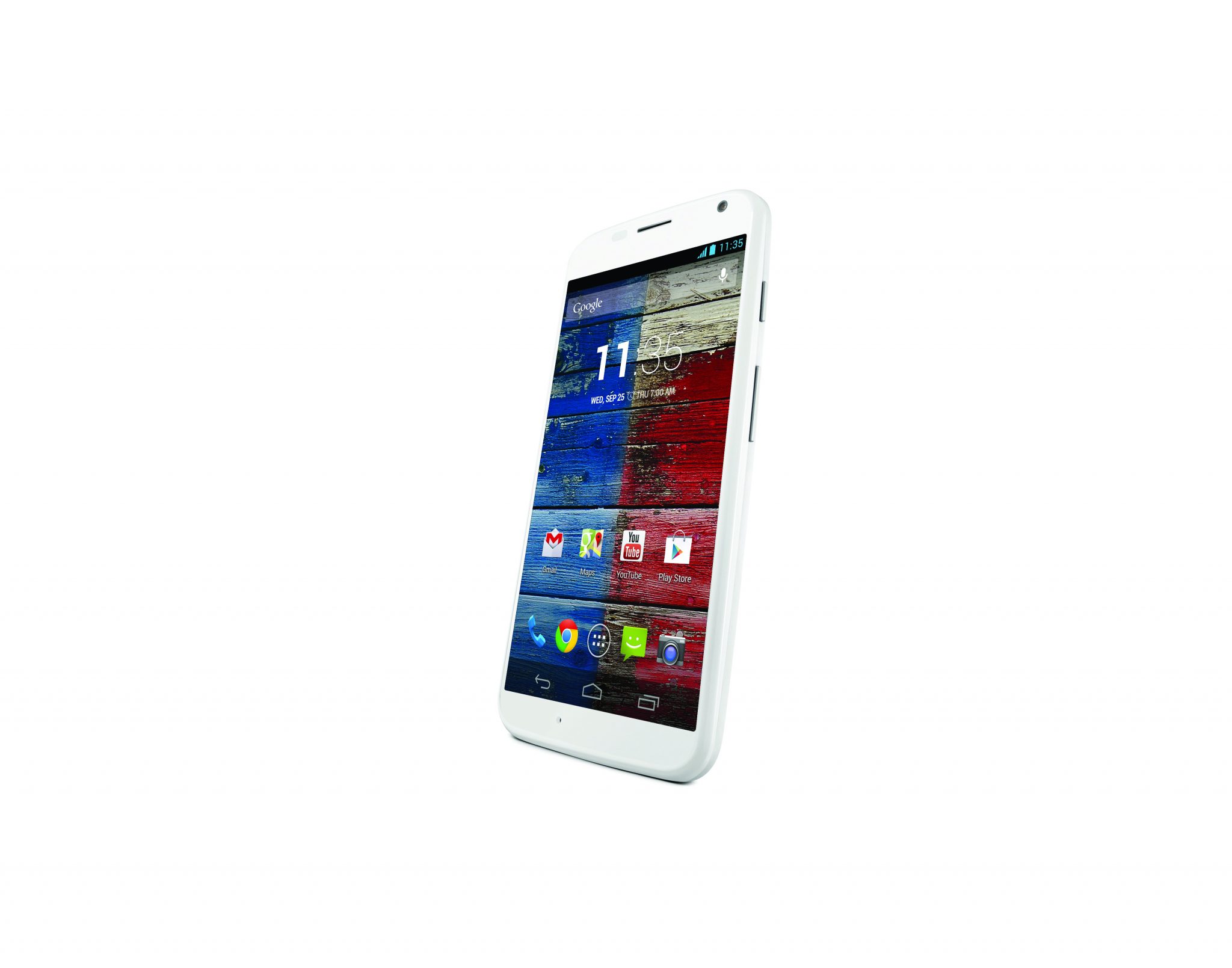 Motorola redefined budget phones with the £135 Moto G. So what can it offer higher up the price scale?

The Moto X is a top-tier handset that starts at £380 SIM-free, which makes it roughly £150 more than its little brother. For that price you get the expected bump in specs, a lighter phone and unique new features that take advantage of Motorola being under Google’s control.

The Moto X sticks to the design template of the Moto G but chops away bits and pieces. While it retains the plain plastic front and backing, the bezel is almost invisible around the screen. Handset width is over a millimetre thinner than the G, too, and it weighs 13g less.

These differences may be very small but when you compare both in hand, you’ll welcome the trimming down. It takes up less space in your pocket than a Moto G and the lighter weight is noticeable.

There are a few disadvantages to this ‘upgrade’, however. The back of the Moto X cannot be removed, whereas the Moto G allowed swaps with colourful plastic backings. So you’ll have to make do with either of the standard black or white.

SIM-card access is easier, though ‘ you simply insert the card into a tray on the side, without having to remove the back.

Motorola hasn’t just bundled in the latest ubiquitous Qualcomm Snapdragon chipset. Instead, it has engineered its own Motorola X8 Mobile Computing System.

The X8 stands for eight cores (or octo-core, as the company likes to say) dedicated to different tasks. Six are used in a Snapdragon S4 Pro processor that handles the graphics and processing power. The other two are interesting as they use the Google Now service for voice-operated control. Google Now is the search giant’s spin on Apple’s Siri, serving up facts, directions and other information at your command. This is where the final two processors come into play.

One is a natural language processor that helps to pick out and identify your voice, so the phone adapts and reacts to you.

Say “Okay Google Now”, followed by your request, and you’re off. The phone exclusively recognises your voice but won’t be put off if there’s any change in your speaking tone such as if you’re suffering from a cold, making your speech a bit stuffy.

The other core is a contextual processor. This cuts out the barrier of having to repeat yourself when talking to your phone. If you ask, “Okay Google Now, where are the What Mobile offices?” you’d then simply have to ask “How do I get there by foot?” for walking directions, without having to repeat the location. The processor will remember this information so you can keep asking questions that build on top of previous ones.

The voice operation is one of Moto X’s best features. We used it in a busy London street, only having to repeat ourselves once or twice for directions. It proved much easier than fiddling with a tiny keyboard in the cold weather.

Rounding off the list of extra features is Active Display ‘ a twist on sleep mode that will keep pushing alerts to you when your phone isn’t in use. Typical Android icons will appear on the screen when you receive a new message. Moving the phone while it is in sleep mode will trigger the display to show the time and any new notifications for a few seconds.

The Moto X is also one of the first non-Nexus devices to be running Android 4.4 out of the box. The experience is pretty similar to what you will find on Nexus devices, though, as Motorola has wisely stuck closely to Google’s layout for the user interface.

There’s also plenty of storage space available from the start, with the phone available in 16GB and 32GB models.

The 10-megapixel rear camera is a big upgrade on the cheaper Moto G. Firstly, Motorola has inserted a feature by which you can access the camera app with just two twists of your wrist. It’s faster than unlocking your phone and finding the app yourself, but only if it works. Most of the time it would take us two flicks to get the correct motion, leaving us shaking our fists on the street.

As for picture quality, the sensor snaps crisp, true images that won’t wash out colours. You get a x4 zoom (though fully zoomed snaps will blur noticeably), and the same editing software used on the Moto G. There are no buttons ‘ you use touch gestures for zooming and focusing. It’s simple enough but it could still be confusing for first-time users.

The camera’s flash can also confuse the app. Sometimes the phone can take as long as 30 seconds to decide to use the flash or not before taking a snap. Obviously, this isn’t ideal for capture-the-moment snaps.

A 2,200 mAh battery powers the engine room. This is a perfect fit for the Moto X. It lasted an entire day on a 4G connection, darting about London getting directions, and it still had enough juice to last until midday the following day. Charging will only take three hours.

With the release of the Moto X there are now two top quality Motorola phones to choose from. The Moto X is a mid-tier, £380 phone, while the 3G-only Moto G is a groundbreaking £135 budget handset with great specs. So how do the Moto X and Moto G compare?

The main difference is that the Moto G does not support 4G networks. The Moto G uses a Qualcomm Snapdragon 400 processor, while the Moto X is powered by the X8 Mobile Computing System. What does that mean in the real world? We weren’t able to play Thor: The Dark World on the Moto G, yet it runs smoothly on the Moto X. So the latter’s processor is more powerful, at least for games. Both devices have the same screen resolution of 720p.

Both phones look similar, with plastic casing. Neither design is exactly bulky but the Moto X is noticeably trimmer. The Moto G is 11.6mm thick compared to the Moto X’s 10.4mm. The Moto G weighs 146g, while the Moto X sheds 16g at 130g. The Moto G features a removable plastic case that you can swap for a more colourful option, which you can’t do on the Moto X.

The Moto X is a solid upgrade from the Moto G. A £380 price tag doesn’t have as big a “wow” factor as the £135 Moto G but it’s still a great price for what’s on offer. The Moto X has a faster processor, better camera and a refined design. What more could you want from a £380 phone? How about the handy Google Now features? If it keeps up this momentum, Motorola will give Samsung, LG and HTC a run for their money.