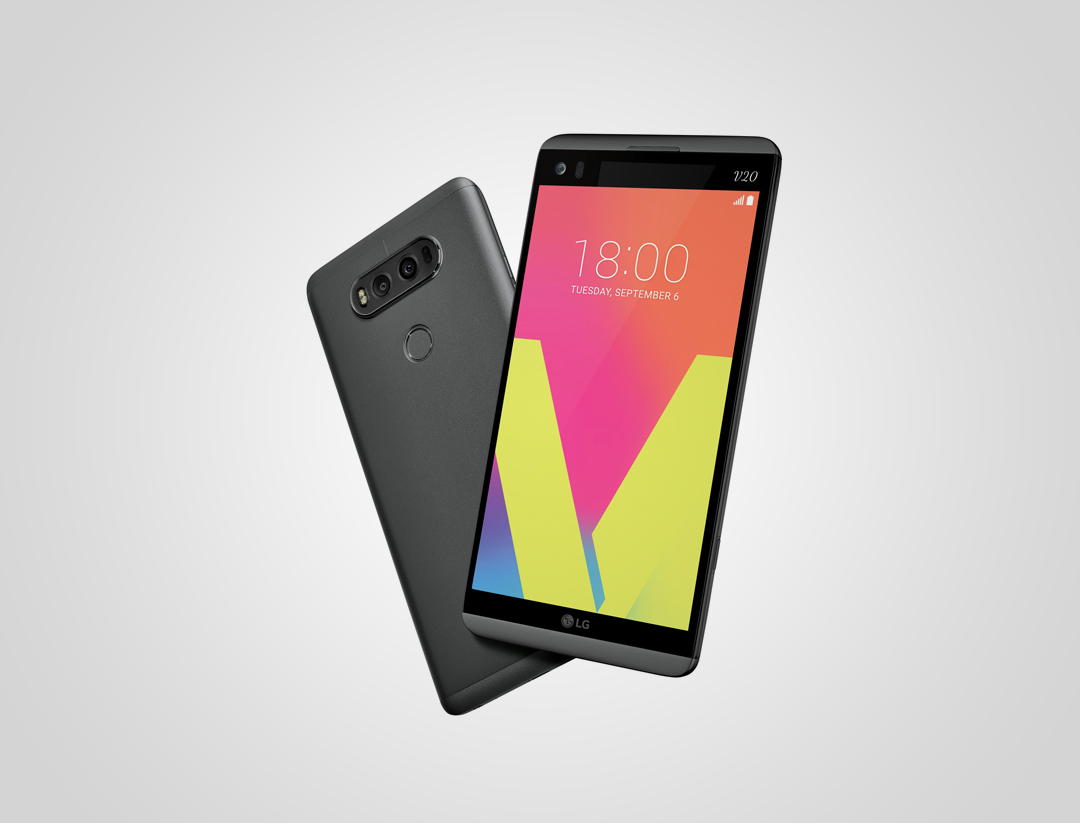 The not so secret LG V20 has been unveiled in San Francisco with features audiophiles will love and have other manufacturers looking over their shoulders.

Launching a new phone before Apple is always a good idea, LG are cutting it a bit fine doing it a day before. Had it happened on the 8th the impressive V20 would’ve probably been overshadowed. It’s the successor to the V10, which has a unique secondary screen. Like it’s predecessor, the V20 is the much better option of LG’s high-end flagship lines.

The V10 never saw a UK release so the question lingers, will the UK see the V20 launched? South Korea will see the V20 in stores this month, as will the US with the country’s top carriers stocking it, including AT&T, Verizon, T-Mobile and Sprint. LG said it will expand to “other regions,” as the manufacturer are carrying out a trickle release.

Bang for your buck

The 32-bit QDAC (quad digital audio converter) was one of the few teases on the V20 from LG itself. It’s the world’s first smartphone to employ a QDAC and it offers what LG are claiming “the purest audio experience.” Still in partnership with Band & Olufsen, the audio manufacturer helped fine tune the V20, offering 75-stage volume control and L/R balance controls.

The microphone can record voice memos, to loud concerts with a high degree of clarity. There will be no distortion or clipping heard when video recoding. If you like listening to live music, the V20 is able to save the audio from a video as a high quality file.

LG are even boasting the the V20 will offer high quality sound to any earphones, but to really take advantage of the QDAC, you need to get some high quality earphones.

Don’t have a pair? Worry not as every LG V20 will be packed with a pair of Beoplay H3 earphones. The earphones retail for £129 separately.

It will of course play cater to lossless music files such as: FLAC, DSD, AIFF and ALAC.

Smartphones with a DAC are typically underpowered, running old software. The LG V20 backs itself up with top-end specs, worthy for any tech lover. It uses the Snapdragon 820, just like the G5, which is the de facto processor choice for top-end flagships. To compliment the processor, 4GB of RAM is used to make flicking through the interface incredibly quick.

Unlike the V10, the V20 bears more of a resemblance to this year’s G series. The lightweight aluminium used on the G5 is brought over to the V20. It’s the same aluminium used on aircrafts, something LG also bigged up on the G5. With such a boast you need to back it up, LG are doing just that saying the phone passed the military-level MIL-STD 810G Drop Test. LG made this possible by adding rubber into the top and bottom, if your grip ever fails you.

Also ported from the G5 is the dual camera system. It’s not monochromatic like the Huawei P9, instead one has a 135 degree wide angle lens (8MP), the other a standard 75 degrees (16MP). The 5-megapixel front-facing camera also gets the double lens treatment, 120 degrees and 75 degrees are the options, making group selfies less awkward.

MicroSD is up to a massive 2TB to support the 32/64GB internal memory, battery is 7% more than the G5’s at 3,200mAh, and a rear facing fingerprint sensor is present.

LG’s take on modular design was admirable, but sadly ‘LG Friends’ didn’t exactly set the world alight. LG has recognised this and decided not to dedicate space in the V20 to modular attachments. However LG did include a feature that is rarely seen in flagships, a removable battery is in tow, one that is accessed by pressing a button down the side, to slide off the back case.

LG may have abandoned its old friends, but it has seemingly strengthened other relationships, particularly with Google. Google’s Pixel and Pixel XL are expected in the coming weeks, however the V20 will be the first to officially have Android Nougat. You get some great Nougat features such as direct replies, multi-window viewing and detailed notifications.

Nougat is designed with phablets in mind, the LG V20 is hitting that unofficial phablet border, with a screen measuring in at 5.7-inches. The display is a dazzling QHD, 2560 x 1440 pixels with a 513 pixel density. The secondary screen is back from the V10, it’s slightly bigger with bolder fonts and looks to be more useful thanks to Google In Apps.

There’s a special Bang & Olufsen edition of the V20, with the B&O logo etched on the back is confirmed for release in South Korea, not the US and doubtful for other markets. We will update with pricing and availability once we get the update from LG.