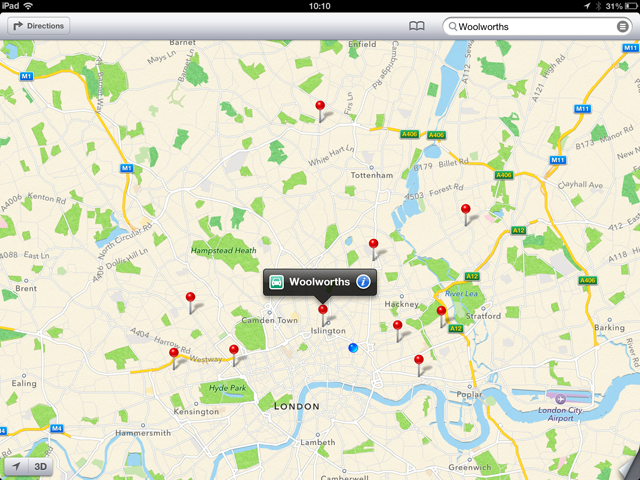 Apple has fired yet another executive over the Apple Maps fiasco, as the company looks to repair the damage done – damage which has allegedly hurt the launch figures of the iPhone 5.

This follows from Apple CEO Tim Cook issuing a public apology for the service, as well as the sacking of the senior vice president of iOS, Scott Forstall.

Apple Maps was launched as part of Apple’s latest operating system upgrade, iOS 6, as part of Apple’s plan to push favoured Google services off its devices. The deep integration within the OS means that users are stuck with Apple Maps by default. But whereas in the past Apple may have been focussed on producing the best experience possible for its users, namely the veteran Google Maps, it instead launched a maps service so broken, websites devoted to its errors (see: ‘The Amazing iOs6 Maps‘ tumbler feed) sprung up within hours of launch. Bizarre issues such as accordian-crunched bridges, melting cities and bridges to nowhere abound.

In the UK and Ireland, Airports were in the wrong places, towns were unmarked and iconic monuments missing (hat tip: Huffington Post). Navigation was also unfinished, and often sent users on incorrect routes. So much so that the Irish Minister for Justice, Alan Shatter, described the new Google-less maps as ‘dangerous’.

While this is a serious failing by Apple, it as much a data problem as anything. Google Maps has been built up by nearly 10 years of user and business submitted data, hence why you can find your local laundromat and favourite underground burger joint. Apple, and to be fair, all other map rivals, have had similar problems.

Apple purchased mapping company C3 late last year with an eye to building its own mapping software from the ground up. It is understood that Cue is now looking to external mapping experts such as Tom Tom to come in and help fix the issues, as well as share its own landmark and navigation data with Apple.

Google has already announced that it will be producing its own Google Maps iOS app, which will be putting pressure on Apple to get its service up to scratch. iOS 6 users have already been clamouring for alternatives, and although big players like Nokia launched its ‘Here’ app last week – it has not been an acceptable substitute.

Much of the glee at Apple’s demise, while schadenfreude-esque, is not entirely unwarranted. Apple’s hype machine only really works if the product matches its lofty ambitions. It certainly didn’t here.

More Stories
Ofcom: First stage in mobile 4G auction underway
Ofcom has started taking applications to take part in the 4G mobile radio spectrum auction, which is due to occur early in the new year. Applicants have until 4pm today to submit their applications, along with the £100,000 deposit. Vodafone, O2 and Three have all put their applications in, which will give them the right […]
News - Allan Swann

EE unveils iPad Mini plans
In one of the least surprising announcements of the year, EE has announced that it will be selling the iPad Mini and iPad 4 with a range of 4G data plans – the only network able to do so. EE boasts speeds typically five times faster than 3G’s 1.5mbps (and above the UK’s average ADSL […]
News - Allan Swann
New charity focused mobile network to shake up the industry
Today saw the launch of ‘The People’s Operator’, a new mobile virtual network operator that plans to match the big guns in the sector by offering comparable service, at cheaper rates – while simultaneously giving 25% of its profits to charity. The network is currently pre-pay, and doesn’t have any retail storefront to sell from, […]
News - Allan Swann
CES Unveiled London: No surprises – smartphones and tablets to dominate Christmas
The organisers of the world’s largest consumer electronics show, CES, believe that smartphones, tablets and their integration with other products will dominate January’s show. The Consumer Electronics Association’s Director of Industry Analysis Steve Koenig and Shawn DuBravac, its Chief Economist and Senior Director of Research took the stage at CES Unveiled London to layout their […]
News - What Mobile