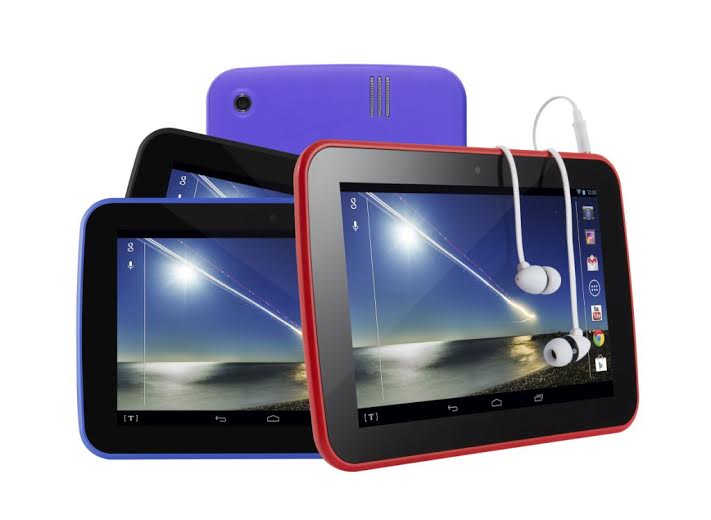 Just the existence of the Tesco Hudl says something about how much the tablet market has grown. Four years on from everyone claiming the iPad to simply be a ‘big iPhone’ and even mainstream supermarkets are trying to get in on the action. Here, Tesco has taken the family angle, with a cheap ( £119), seven-inch device that’s designed to be accessible. Is this good enough to rival Google’s Nexus 7?

The Hudl is a little bigger than other seven-inch devices. That’s mainly down to a thick bezel that measures well over a centimetre on every side. This makes it awkward to hold one-handed in a portrait position, as your hand has to stretch too far. Normally tablets with this display size are ideal for reading books, comics and browsing the web thanks to one-handed operation but the Hudl misses out on this.

A glossy finish as been applied to the front of the device, giving it a premium feel. However the backing is made of a flimsy plastic that leaves a small gap between it and the innards. It’s possible to push in this backing inwards slightly, which keeps it from feeling completely sturdy and well-made. The Hudl branding on the back also feels a little tacky. It may not have the fashionable design of an Apple product but families looking for a cheap, simple tablet aren’t likely to care.

Strangely, the power buttons and rear-facing camera are at opposite ends of the device. If you hold the tablet so that the power and volume buttons sit on top, then the camera is on the bottom. Holding the camera upright will then put the buttons on the underside of the device which feels unnatural. It’s clear that the Hudl has been designed with landscape viewing in mind as the front-facing camera and charging dock are placed in the middle but more thought should have gone in for those who prefer to hold a tablet like a book or magazine.

Thankfully, Tesco has kept the software on the Hudl simple. It runs Android’s 4.2 Jelly Bean OS with very little added on top. The menu and interface are both exactly like you’ll find on the Nexus devices, which is a simple layout of different apps. Anyone that’s used an Android phone or tablet in the past won’t have any trouble with this.

As you might expect, the device comes with plenty of advertising for the supermarket giant. The device is loaded with Tesco-branded apps and widgets that might be helpful to the shoppers in the family. There’s a dedicated shopping app for home-deliveries as well as a store locator and three separate apps for the company’s media-streaming blinkbox services. For avid Tesco shoppers these apps have their uses, as you can spend Clubcard points to get free movies and TV shows. Given that the tablet is only available through Tesco, there’s a good chance that you’ll be wanting to at least some of these.

None of these apps eat up much of the Hudl’s 16GB of internal storage, which raises a mystery. Despite apps taking up just 463MB of the space, there’s only 11.90GB available. The device’s settings don’t mention where the other 3.5GB is being used, making us wonder how Tesco has managed to advertise this as a 16GB device.

As you might expect, the Hudl isn’t packing the kind of specs that will compete with other popular tablets. The company claims that it’s using a quad-core processor clocked at 1.5GHz, but a few noticeable issues prove that it isn’t using the most advanced options.

For example, there’s a seconds delay when switching orientation. The device will freeze up before adjusting to how you’ve moved it. It also tends to react a few seconds slower than a lot of its rivals. We noticed as much as four second delays from pressing an app like Youtube to it actually appearing onscreen. When using Comixology to read comic books, the app would stutter when turning the ‘page’ and would then take a few seconds to render the next image so that it was clear. These small waiting times won’t mean much to most of the Hudl’s market but for those hoping to get a bit more out of their tablet, there are clearly better options.

Despite being a budget device, the Hudl does include a mini-HDMI port that allows you to link up your tablet to other HD screens so you can share snaps and videos on a bigger display. It’s a nice bonus that gives it a leg up over a lot of other slates, although you’ll have to supply the supported cable by yourself.

It’s clear from the landscape-centric design and built-in apps that Tesco has positioned the device as a viewing platform first a foremost. The HD screen does as good job of running any content from Youtube videos to movie streaming. It won’t blow you away but images are crisp and clear.

The Tesco Hudl won’t win any awards for specs or design but it’s easy to recommend the tablet to any family looking for an affordable, portable space to store pictures, browse the web and watch movies. That’s thanks to its brilliant £119 price tag and simple, accessible software. Tesco shoppers will get more mileage out of the device than most, but parents looking to keep children entertained will find that this little tablet helps.