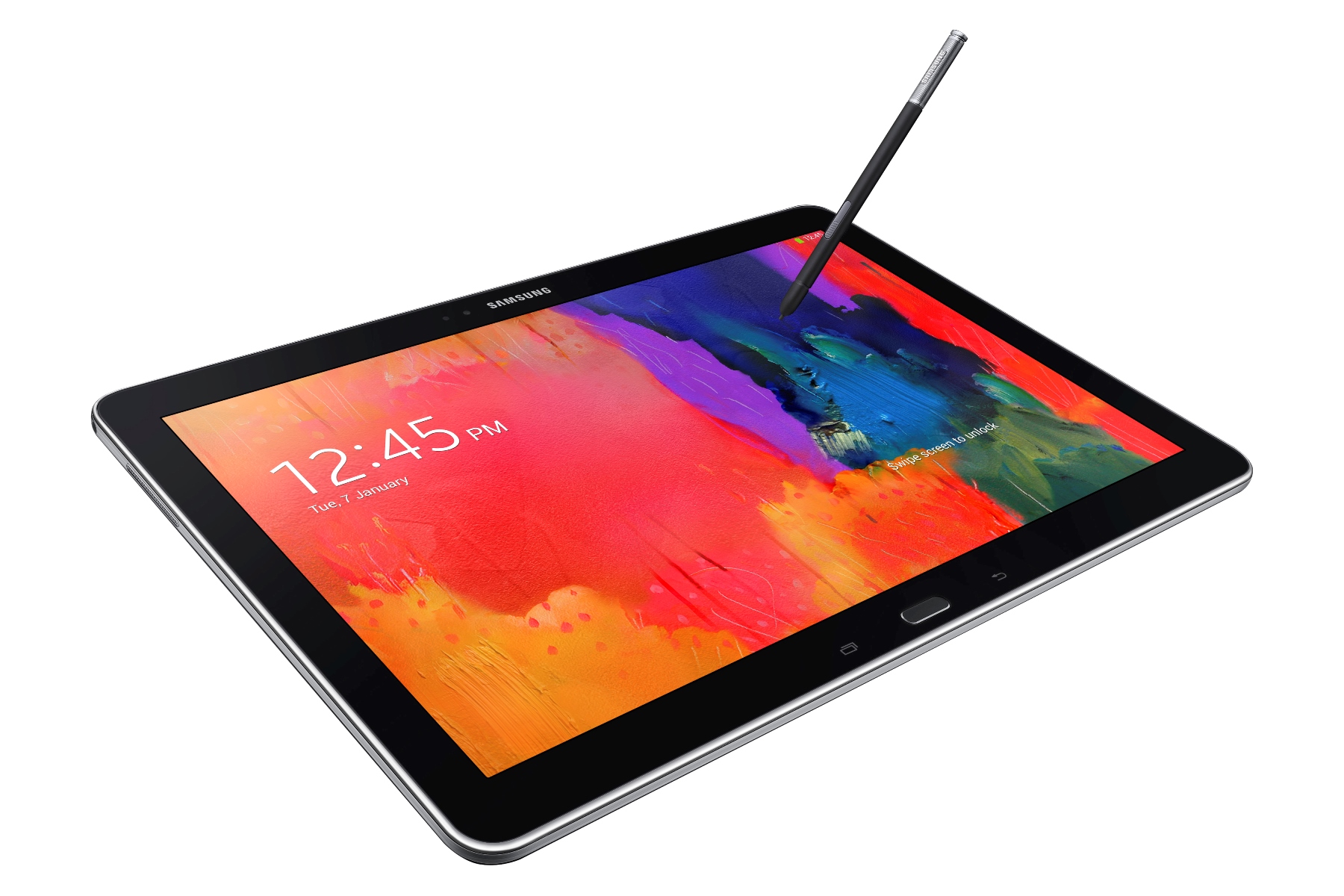 With the rate that Samsung churns out tech, you’d be forgiven for overlooking one of its multitude of mobile devices.

With the NotePro 12.2, you’d have to be wearing a blindfold to miss it. Sporting a display over a foot long, it’s one of the biggest tablets we’ve ever seen, easily setting itself apart from high-end rivals and Samsung’s own identikit white slabs.

With such an eye-catching display, it’s a good thing the NotePro 12.2 has the resolution to back it up: 2,560 x 1,600 pixels, which equates to a density of 255 pixels per inch. That might not sound like a lot compared to your smartphone’s display, but the new iPad Air’s screen is a whole 3.5 inches smaller and only packs in an extra 9ppi. The NotePro 12.2 looks very sharp and incredibly vibrant too ‘ particularly with the backlight cranked all the way up.

The huge display has other benefits besides the increase in pixels. Its vast width means that when browsing websites via Chrome, you get an almost desktop-like experience, with sites showing their full contents in original format and aspect ratio.

It’s also a fantastic way to watch video, and if you have a long commute, then the NotePro 12.2 could make it a whole lot more bearable. The same goes for games, although more processor-intensive, fully 3D games see a noticeable drop in frame rate compared to on a smartphone. This could be down to a number of factors, most likely poor optimisation on the part of game developers to take into account such a large resolution. It could also be down to the NotePro 12.2’s ‘octo-core’ processor.

See, the thing is that the NotePro 12.2 doesn’t have a true octo-core processor; it actually combines two quad-core processors. It’s still an incredibly powerful device, as its 3GB of RAM shows, and it breezes through most tasks ‘ simpler games such as Jetpack Joyride run perfectly. But don’t be fooled into thinking its chipset will blow the competition away. It does, however, sit comfortably at the top of the pile as one of the most powerful tablets out there.

This power does come at a price, though. As you might have suspected, the NotePro 12.2 is not the most mobile of tablets. Its giant screen, combined with all of its fancy innards, mean it weighs a super- heavyweight 750g. That’s 272g, which makes it more than a third heavier than the iPad air and 88g more than the iPad with Retina Display. The fact that Apple decided to redesign its tablet, which was already lighter than the NotePro 12.2, to reduce its weight, tells you just how heavy this device is.

It’s not all bad, though. The sheer surface area of the NotePro 12.2 means it’s impressively thin at 7.95mm, which is only 0.45mm deeper than the iPad Air. Its four-sided bezel isn’t too fat either, and while it might look like most other Samsung devices, the faux leather backing is a surprisingly nice touch. Just don’t expect to be able to use it one-handed like you might be accustomed to; you’ll have to find a surface to rest it on, or spend your time straining, hunched over your lap.

To some extent, that doesn’t really matter. This is a tablet designed, first and foremost, with business in mind. There’s a wealth of business-oriented apps and widgets pre-loaded including Businessweek+, Cisco WebEx Meetings and Samsung e-Meeting. There’s even Hancom Office, Samsung’s answer to Microsoft’s Office suite, meaning you can look over your documents and presentations on the go. There’s also the infinitely useful Remote PC application, which allows you to access your home computer via your tablet wherever you have an internet connection, meaning no more forgotten articles or missing presentation slides.

The NotePro 12.2’s keyboard is also far and away the best we’ve seen on a tablet. It’s simply fantastic, almost to the point where it’s as good as a regular external keyboard. It makes full use of the large display, with keys spaced apart well, and dedicated number keys are unendingly useful. Not only that, you can also execute standard keyboard shortcuts thanks to a Ctrl key, just like on your PC. Typing on your NotePro 12.2 is totally different to other tablets.

All these work-related features are great, but that’s not to say there’s nothing here for the leisurely user. The NotePro 12.2’s stylus, or ‘S Pen’, as it’s called, is more than a simple pointer with which to tap at your screen ‘ there’s a whole raft of ways to use it. It’s clear that Samsung has made an effort to integrate the stylus knowing that on a tablet this size, users would be perfectly happy just using their fingers.

Upon unsheathing the S Pen from the side of the device, you’re given a small pop-up menu of quick actions. The most useful of these would have to be ‘Action Memo’. Give it a quick tap and a Post-It Note-style window opens up. You can then scribble with your stylus and once you’re done, the NotePro 12.2 can read your handwriting and translate it into storable information. For example, if you’re on the phone to a business contact and need to take down an address, once you’re done, tap on your hideously scrawled handwriting and the NotePro 12.2 magically reads it. It can even bring up the location on Google Maps. The concept is good and the execution is fantastic.

There are other handy features to make use of the S Pen such as Screen Write, which takes a screenshot of the device and lets you write or draw over the top of it. Again, this is ideal for business types who might need to amend documents or annotate photographs on the go. Then there’s the S Note app, which gives you a blank canvas and allows you to do with it as you please. The S Pen has an uncanny sense of tact to its tip, which makes drawing or painting feel oddly genuine. It’s also pressure-sensitive, meaning budding virtual artists will have greater control over their brush or pencil.

Understandably, all of these features take their toll on the NotePro 12.2’s battery. While it’s fitted with a sizeable 9,500mAh power source, most of that is dedicated to powering the extra-large display. You can still get a good two days of medium-intensity usage from a single charge. What’s not quite as pleasing is just how long it takes to recharge; we found that from completely drained to 100% battery required more than 7 hours connected to the mains. It should be noted that it also connects via USB 3.0, so while your more common USB 2.0 cables will still work, it will take even longer to charge.

Despite minor flaws and its cumbersome build, the NotePro 12.2 could be the best tablet on the market. Its enormous, sharp display and terrific set of unique features put it head and shoulders above almost all other Android tablets. The only real worry for Samsung is the iPad; Apple’s hordes of passionate fans are notoriously tough to convert. With a price tag of £650 for the NotePro 12.2 ‘ double that of the iPad Retina ‘ Samsung has hardly given them a reason to switch. Still, if it’s an Android tablet you’re looking for, your search ends here.

With  one of the biggest displays ever seen on a tablet ‘ with no detriment to quality, decent design and a super-powerful processor to run loads of unique applications – the NotePro 12.2 is arguably the best tablet on the market. And it’s certainly the best Android slate.