Whether you like the iPad or not, you have to admit that Apple has brought back interest in tablets. Now Dell is offering its own, based on Android, that doubles up as a phone…

Dell is one of the many PC-manufacturers that is getting into the mobile phone business, realising that Android gives them the tools to turn out products quickly and easily.

At the start of the year, it showed off a number of different tablet concepts to use Google’s operating system, with 5-inch, 7-inch and 9-inch models.

Although the company has signalled its intention to produce a family of Android-based tablets, the only one to have gone on sale so far is the 5-inch version. As Apple is rumoured to be producing a smaller iPad, most likely 7-inch, we can probably predict the size of the next version.

But, as many iPad owners are finding, too large a screen impacts on portability. That makes a 5-inch model seem quite sensible, and it’s hardly small. Even at this size, it’s too big to use as a phone, although it has been designed to work as one. Dell must have had a real dilemma when deciding whether to include phone functionality or not. Given that it has both Wi-Fi and 3G, it is capable of functioning as a phone, so Dell opted to allow it to work as one. Realistically, nobody is going to have this as their main phone – which means having another contract on something a little more sensible. But it’s perhaps reassuring to know that, if you needed to just the once you could make a call on the Streak.

Like the iPad, you’re most likely going to use this at home or in an office most of the time. It does make us wonder if a Wi-Fi only model would have sufficed, or been offered as a cheaper alternative.

For some reason, Dell has opted to use a totally non-standard data and charging connector, which is a stupid mistake. It means you’ve now got even less incentive to take the Streak with you, as it means carrying your one non-standard lead, or buying a spare non-standard lead. Dell has obviously forgotten that the entire industry is moving over to micro-USB sockets, which are smaller and more manageable.

Given the fact that the battery life of the Streak can really get hammered if you’re going to spend your time surfing the net, playing games or watching films, it’s a big black mark against the device.

Nevertheless, once powered up, you’ll want to forgive Dell for its lack of foresight. The screen is gorgeous, and despite its larger size, the 800×480 resolution is more than sufficient.

Dell has reduced the font size, meaning you can fit loads of text on the screen. For email or looking at the web, you do begin to wonder why you’d need an 9.7-inch iPad to view the web – especially when the difference in resolution is pretty small. The Streak is also widescreen, making it an amazing media player.

The home screen is also well designed, with the easiest way so far to add or remove panels. It’s a shame, then, that removing icons and widgets from any panel is a little bit more of a challenge. Also because of the reduced text size, some widgets can look a little odd.

There’s no pull down notification bar, but because of the larger screen size, it’s still easy to click on the appropriate section of the status bar and get all the information on what’s going on, such as new emails, appointments, application updates and so on.

Android is quickly proving itself as the perfect operating system for tablets, although the Streak only ships with Android 1.6. An update to 2.1 is coming and 2.2 is likely, although no date has yet been given. Future tablets are likely to be designed around Google’s 3.0 operating system, with new features planned to give extra functionality to tablets. The hardware requirements are likely to include the need for a higher resolution display, so 2.2 is going to be the limit to which the Streak can be upgraded.

The camera is neither amazing, nor disappointing, and if you aren’t going to be taking the Streak with you on the move, there are probably few situations where you’ll even need it. Like the ability to make a voice call, it’s a nice thing to have and the front facing camera does offer the ability for video calling. You can also record video, and there’s even an LED flash too. All things that the (current) iPad is missing.

And, if we have to make the inevitable comparisons to an iPad, it’s also important to point out the the microSDHC card slot that lets you choose how much storage you want, up to 32GB. Getting the top capacity memory card will cost around £100, but you can perhaps justify it to yourself by having the knowledge that you can throw the memory card in whatever device you upgrade to in the future.

Android is rapidly catching up on Apple in terms of the number of apps on offer. In fact, given the fact that the Streak can run all Android apps as is, without being scaled like running an iPhone app on the iPad, the Streak is even more level than you might have thought. Unfortunately, there are some apps that require OS 2.1 or above, meaning  you’ll have to wait for the OS update before being able to install things like the official Twitter app.

Should you also have another Android phone, any apps purchased for one device will be available on the other, as long as you use the same Google account on both.

Dell has also used toughened ‘Gorilla Glass’ that is almost scratch-proof. We’ve seen videos on YouTube showing the Streak being stabbed with a pen and living to tell the tale, but we’d still keep it in the pouch when not in use.

Like the iPad, Dell doesn’t supply much in the box. You’ll get the device, a charging cable and a pouch that can also be used to clear fingermarks from the display.

The biggest problem I can see for the Streak is convincing people to shell out £450 SIM-free, or buy on a lengthy mobile phone contract, given the fact it’s really an additional gadget for your collection.

If O2 offered the option to share your voice and data allowance between this and a ‘proper’ phone, it would be a lot more appealing. As it stands it’s a bit of an executive toy, although that has certainly worked out just fine for Apple.

The Dell Streak is an excellent tablet that will be even better with the OS 2.1 update. The problem is it’s quite expensive and only available on O2 with a normal phone contract. As it’s too big to use as a phone, you’ll almost certainly need another contract. At £450 SIM-free it’s a luxury toy, albeit a very enjoyable and powerful, one. 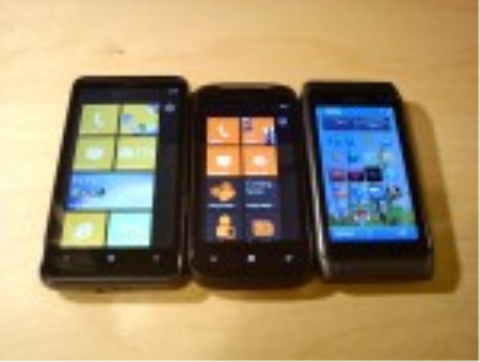 Photos: HTC HD7 vs HTC 7 Mozart vs Nokia N8
Ahead of our reviews of these handsets, we’ve got a simple photo gallery to compare two of HTC’s new Windows Phone 7 devices, plus the public release Nokia N8.
Reviews - Jonathan Morris

BlackBerry Curve 3G (9300) Review
Now faster than ever before, the fully-featured BlackBerry Curve 3G offers both 3G and Wi-Fi connectivity for speedy downloads.
Reviews - What Mobile
HTC HD Mini
It looks like an HTC HD2 that’s been shrunk in the wash, but does the HTC HD Mini come up smelling of roses?
Reviews - Jonathan Morris

Google makes Android 2.2 (FroYo) official
Google has used its Google IO conference to announce Android OS 2.2, including Adobe Flash / AIR support, faster operation, wireless streaming and application installation and the ability to install applications on the memory card. In addition, advertisers will get new ways to sell to us.
Reviews - Jonathan Morris