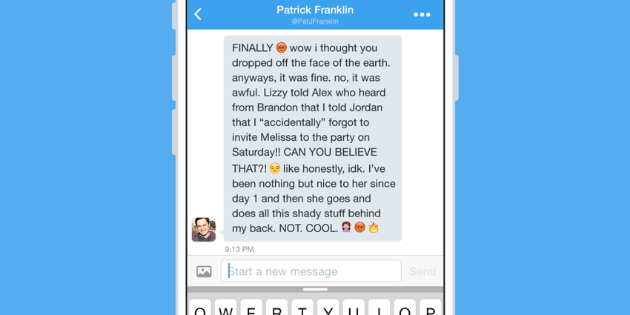 140 characters not enough to say everything in private? Twitter has the problem solved.

Twitter has announced today that it is removing the 140 character limit from its private Direct Message service.

In response to those who prefer to use Twitter’s messaging aspect as a private chat instead of a pseudo-text message service, the move has opened up the possibility of long, long, long messages when there’s a lot to say.

Twitter claims that “today’s change is another big step towards making the private side of Twitter even more powerful and fun” and cheekily suggests that its users start working on a few sonnets to send.

The 140-character limit so characteristic of the social media site

Twitter will begin rolling out the updates to all platforms today, including its Android and iOS apps, TweetDeck and Twitter for Mac. It will continue rolling it out worldwide over the next few weeks. The website is already free of its former restriction, as demonstrated above.

Direct Messages via SMS, unfortunately, will still be limited.

Fitbit app gets Windows 10 makeover
Fitbit today announced an update to their popular Windows app which brings forth plenty of new Windows 10 specific features. The application was designed to compliment the family of fitness wearables and offer some much-needed improvements that take advantage of Microsoft’s new operating system. The new update  is built using the Windows Universal App Platform, […]
Apps - Thomas Wellburn

Nintendo Mobile Games Moving Forward Despite Iwata’s Death
Mobile game developer DeNA has announced via its financial report that the company is still on track to release five Nintendo mobile games by 2016. DeNA has today confirmed that despite the loss of Satoru Iwata, the company will still be pressing forward with the release of Nintendo mobile games. Tokyo-based Kantan Games CEO Serkan […]
Apps - Thomas Wellburn