Samsung’s incredibly popular (and rather good) Galaxy Note range have managed to distinguish themselves from the ever-growing phablet market by utilising not just a stylus, but a stylus that is actually useful.

The S Pen stylus was used for a number of features, such as Action Memo, Screen Write, S Note, Scrapbook, or Pen Window. Not intent to rest on their laurels, Samsung have filed a new patent detailing a number of original, exciting new stylus-based concepts.

The central theme centres around using the stylus to perform actions while your smartphone is locked. Already present on the Note 2 and Note 3, signing your signature allows you to unlock the phone, as it recognises your handwriting.

The new features patented would allow you to write out basic actions on your lock screen, which the phone would then carry out – no buttons, no menus, just simple stylus-written commands. For example, scrawl out ‘call mom’ and the phone does just that.

Naturally, the filing of this patent has only increased the hype surrounding the release of the Galaxy Note 4, due for release later this year, but has the concept been drafted too late to make the final product? 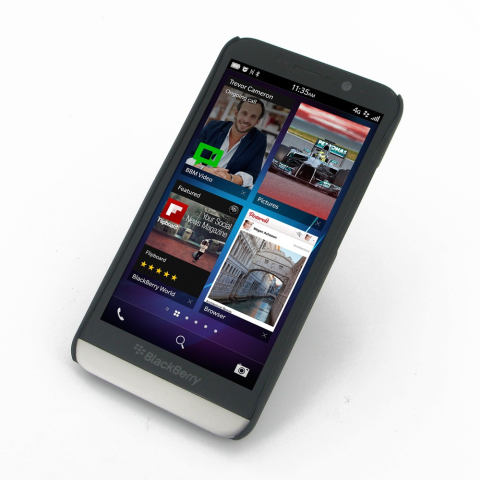 Blackberry to release 64-bit smartphone?
Blackberry could join Apple in the 64-bit smartphone club by releasing its own device later this month. The mystery smartphone will apparently come with a 64-bit octa-core processor, which matches up with previous rumours of an eight-core Snapdragon MSM8994 chip being used. An Adreno 430 GPU and 4GB of RAM are also on the cards […]
News - Saqib Shah
Nintendo releases first free-to-play 3DS titles
Steel Diver: Sub Wars is the first Nintendo free-to-play title to be released on the 3DS eShop. During yesterday’s  Nintendo Direct livestream, the company also announced  Rusty’s Real Deal Baseball, a mini-game collection that will let players  haggle  over the price of DLC expansions. Could this mark Ninetendo’s first cautionary steps toward mobile gaming? Despite […]
News - Saqib Shah
ICYMI 13/02/14: LG G Pro 2 launch, departure of Motorola CEO, global smartphone shipments reach 1 billion
Today’s video round-up includes the launch of the LG G Pro 2 in Korea, the departure of Motorola Mobility CEO Dennis Woodside for Dropbox, and news that worldwide smartphone shipments reached 1 billion for the fist time ever last year.
News - Saqib Shah
Nintendo announce Game Boy Advance classics & another NES Remix for Wii U
From  April onwards, classic Game Boy Advance games will be available in the Wii U eShop. Nintendo have announced that this Spring popular titles like Metroid Fusion, Yoshi’s Island: Super Mario Advance 3 and Mario & Luigi: Superstar Saga. A great list which is sure to get gamers excited, but once again Japan have got […]
News - Callum Tennent