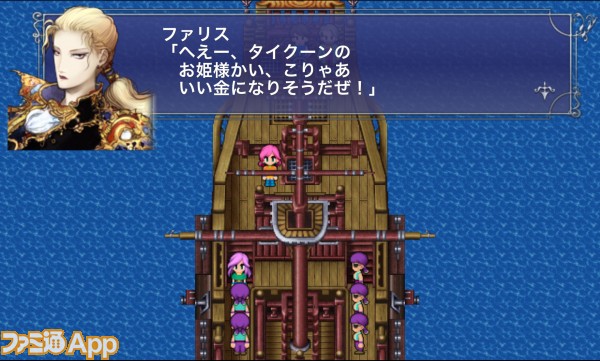 Most video game players are familiar with the Final Fantasy series of games, which achieved Western popularity with 1997’s Final Fantasy VII on the first Playstation – since then it has been in the mainstream consciousness (it’s now up to the 13th iteration, by the way).

Square-Enix has not been afraid to re-re-cash in on their early successes and has re-released the older, Super Nintendo games on Playstation and Nintendo DS before this point (including remake versions). What has been interesting has been the re-releases on Apple’s iOS, allowing it to carve out a ‘hardcore’ gamer’s niche all of its own.

For those not familiar, the series is more a set of roleplaying conventions, rather than an ongoing saga – until recently, no one game in the series had any connection to the other, excluding game mechanics and the odd cult character.

Basically the charm of the game comes from its simplicity: explore a world, solve quests, battle monsters and upgrade your party. Final Fantasy V was one of the earlier attempts at a free roaming world map (it’s actually pretty linear), which means you can explore and find secret quests and generally wander as you see fit on foot, in the air, or by boat, a big boon at the time (1992).

The world map in all its pixellated glory!

The game long had a legendary ‘lost game’ mythos surrounding its release – the original version (on Super Nintendo) never reached Western shores (although Japanese speakers could buy Japanese versions), its sequel and one of the greatest games of all time, 1994’s Final Fantasy VI, was released instead, and annoyingly labelled as Final Fantasy III (the  titling  for Western audiences was never corrected until  FF7).

So interestingly, this may be the only game in the series that a large amount of gamers have never played, in any form.

Unlike future Final Fantasy titles, which would develop epic novelista/manga style plots on a ridiculous scale, FF5’s plot feels like more of an afterthought, filled with various Japanime cliches – the princess pretending to be a vagabond, the old man who has forgotten his past, the emo with daddy issues, missing medallions and crystals; given the importance of a Final Fantasy story normally, this game is a bit of a letdown.

What has been brilliantly done is the translation, which doesn’t suffer from broken English (as Japanese games traditionally have), but has an almost British sensibility, full of silly jokes and puns, something I wasn’t expecting. I suspect it may have been a bit of a rewrite, but it does give the title a vitality that was missing in previous versions.  As mentioned earlier, the story does become boring, and is full of contrived cliches. You can usually predict the plot ahead of time.

Its graphics, as you may have noticed, still have that retro charm. Previously, Square-Enix’s had simply been porting its 2000s full 3D remakes of the earlier Final Fantasy games in the series (the 80s and 90s originals were basic 2D sprites) that appeared on Nintendo DS. Unfortunately, that process stopped at Final Fantasy IV, meaning for this iOS version Square had nothing to work from but the original game.

Instead, what Square have done is attempted to boost the resolution of the 16-bit graphics, limitations and all. The best way to look at it is a higher res version of the original – text is clearer, the  pixellation  is smoothed, and the game looks a lot more cartoony. It retains all the charm of the original, even the cheesy single frame animations, and  up close  illustrations of the protagonist (which look nothing like their onscreen counterparts).

The FF5 battle systems work wonderfully on a touch screen

In terms of the game mechanics, they remain fun for anyone playing with a nostalgic eye, but all have been superseded in the decades since – you can buy weapons, spells and other items in village shops using money earned fighting monsters, your experience goes up, and you become more powerful, as do the monsters. The main introduction in this game was the ‘jobs’ system – namely, you assigned a characteristic to each of your party members (no one was set as a mage, or warrior, for instance), you could chop and change, which made for an interesting game dynamic. There are still silly jobs you won’t use, and you will probably lock your characters into a set pattern anyhow, but it’s a nice dose of freedom, and was revolutionary in its time.

It does control very well on a touch screen. Other than world map navigation, it is superior to using a gamepad. Shopping, battles and organisation is so much easier with a touch screen, and Square Enix have done a good job optimising and updating the interface.  Walking your group around is a bit more hit and miss (it uses an onscreen faux D-Pad), but won’t really affect your gameplay too much. There is a layer of spit shine and polish here that shows Square-Enix have put some effort into it.  There are now icons galore; in the old Super Nintendo days, you needed to sit through tutorials and read a manual (and then press all sorts of random buttons, such as when running from a fight).

It really is a love it or hate it proposition.  There will be three audiences for this game – those that have always hated these types of games, those that will play this game with a modern RPG eye (and consider it terribly dated) and those on a nostalgia trip. As you can see, only one group is going to be happy, especially since Square Enix is asking for an extortionate £10.99 for this game.

Yes, you do get ‘value’ in the traditional gaming sense by way that this is an established classic, the game itself lasts for some 50+ hours, and Square have done some work remastering it. But considering you can get all sorts of modern games of a similar ilk in the app store these days for 69p, its tough to recommend. Most hardcore gamers have been playing this for free via emulators on their PCs (or on Jailbroken Android or iOS devices) for years – I think £5 would’ve been fair.

As it stands, Final Fantasy V is more a gateway to the greatness that would follow in 1994’s Final Fantasy VI – the ideas, game mechanics and even graphics all got their start here, but still feel too primitive and haphazard. When Final Fantasy VI re-releases next year (its 20th anniversary) expect Square to go all out on a full blown, big budget remake. Unlike FF5, FF6 still stands up fine alongside modern games, and many fans believe it was never bettered (even by the blockbuster FF7 on Playstation, or FFX on Playstation 2).

That will be something worth waiting for.

More Stories
O2 signs up for free Underground WiFi from June
O2 has signed up for Virgin Media’s Underground WiFi service, available for customers from June.
News - Alex Walls
Worldwide combined shipment of devices to reach 2.4 billion this year
The combined shipments worldwide of PCs, tablets and mobile phones will hit 2.4 billion units in total this year.
News - Alex Walls
Facebook unveils Facebook Home and integrated HTC First
Facebook has unveiled Facebook Home, a skin or app for Android phones which integrates the service into a device’s home screen.
News - Alex Walls
Industry tips for mobile developers: test, test and test again
Thinking of developing that rocket launcher app into a viable business idea for beer distribution? What Mobile talks to some app developers about how to make it.
News - Alex Walls