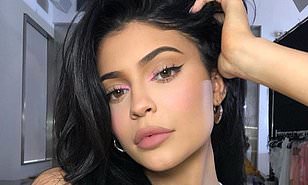 The new study reviewed the average earning potential1 for some of social media’s biggest stars and compared this against the average national salary (£30,4202) to reveal how long it would take UK workers to earn the same pay packet.

Analysing the data, Adzuna can reveal how long the average Joe would need to work to earn the equivalent of one post from Instagram’s 10 highest-paid posters: 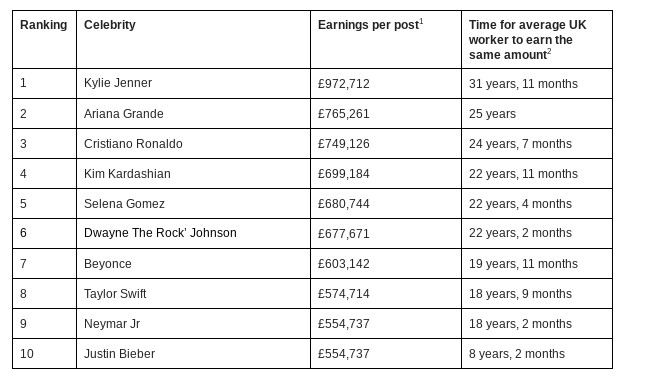 Beauty mogul and reality star, Kylie Jenner, tops the list,  earning up to £973k for one Instagram post, thanks to her 161m followers (and counting)! With an average salary of £30,4202 per year, it would take nearly 32 years for the everyday UK worker to earn as much as Kylie can in one post. It’s worse news for those who work in customer services: with an average salary of £21,2413, it would take 45 years and 8 months to earn what Kylie can from one sponsored post.

In second place is Ariana Grande, who can earn up to £765k for one Instagram post. To put this into context, nurses earn an average of £35,5133 per year, so would have to work hard for over 21 years to make the same amount. But good news if you’re a lawyer as with your annual income of £46,7563, you’d only need to spend 16 years and 4 months at work make what Ariana can in one post!

In third place is Cristiano Ronaldo, the most-followed celebrity on Instagram with over 201m followers4, with earning potential of up to £749k per post. Work in administration? With an average annual salary of £23,5883, you’d have to spend 31 years and 8 months at work before you could earn this much.

However, it’s not just A-List megastars earning serious dough from Instagram. Love Island 2019 winner, Molly-Mae Hague, has over 3.7m Instagram followers, allowing her to make an average of £13,658 from one sponsored post. The average UK worker would need to spend 163 days (or five and a half months) at work to generate the same income.

Commenting on the research, Andrew Hunter, co-founder at Adzuna says: “These findings really emphasise that social media is an incredibly profitable business and one that many people might be aiming to break into. But it’s important to remember that it does take a lot of hard work – and you won’t be able to earn as much as these household names straight away either. Maximising on your current platform and skills such as copywriting, photography and videography can help those looking for a career in social media and should be a key focus on your CV if they are serious about making it online.”

To find out more about average salaries and your profession, please visit: https://www.adzuna.co.uk/jobs/salaries 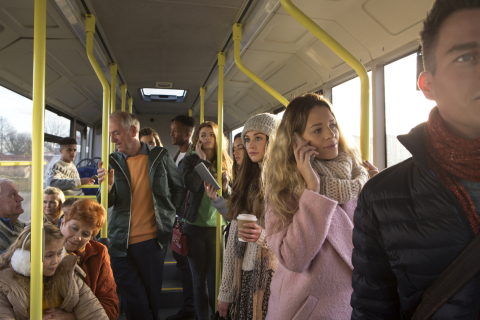 Phone fakers: THESE are the situations we’re most likely to turn to our phones to avoid
New research reveals the real reasons why people pretend to be on their phones People unveil the moments pretending to be on their phone went terribly wrong Three quarters (75%) of smartphone owners admit to faking being on their phone to avoid awkward encounters, new research reveals. Online smartphone retailer, e2save, recently explored the situations which people are most […]
General - What Mobile 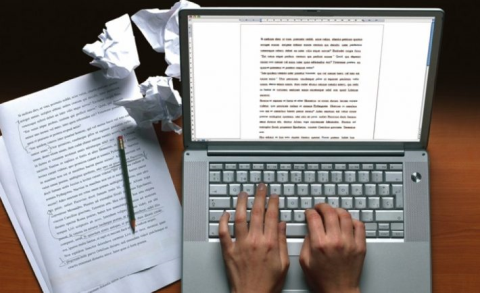 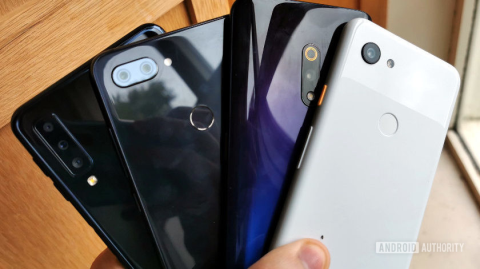 Best mid-range phones to give as gift
Getting a new phone is almost like a tradition for many. The phone you bought a year ago has just started lagging behind those of your friends’ and the thought of upgrading this essential gadget immediately sparks in your mind. Not even that, but phones today can make up for great gifts for the loved […]
General - Konstantin Rabin