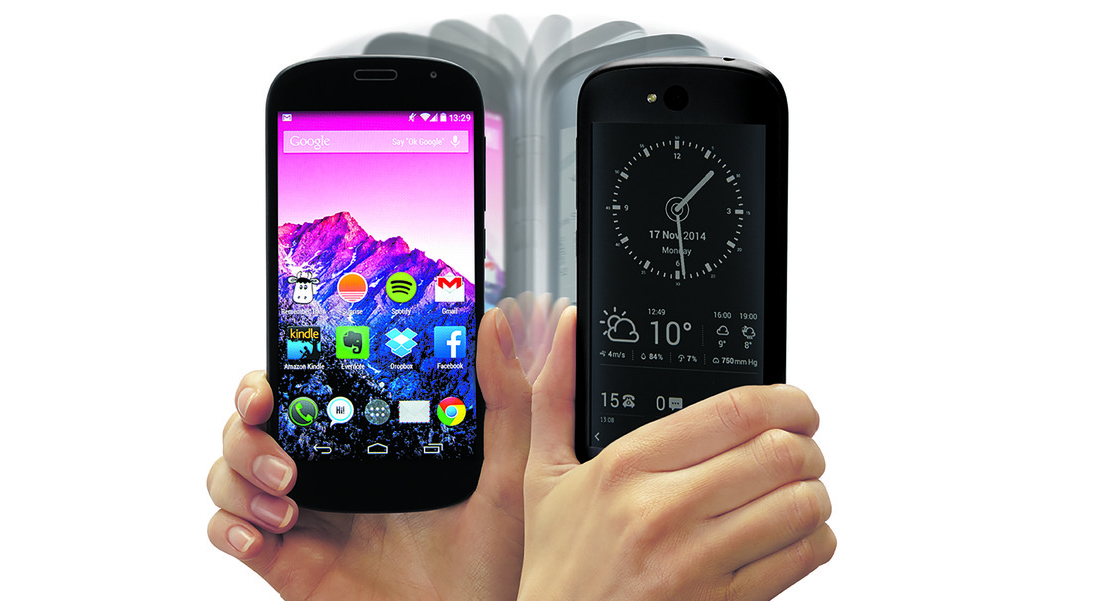 Say what you will about YotaPhone, the company behind a series of handsets decked out with screens on the front and back – one AMOLED, one E Ink – but they’re different from the pack. And in today’s world of uniform black-slab smartphones, that’s pretty unusual. So what if the first model was underpowered, and the e-reader screen ran a different, more limited operating system to the actual Android phone?

The YotaPhone 2 is an excellent innovation that irons out almost all of the problems from the firstgeneration device, which looked cool but made very little use of the E Ink technology onboard. If it weren’t for that high price, this would be a real contender for phone of the year already.

Even without the second, e-reader like display, the YotaPhone 2 is a substantial improvement on its predecessor, which shipped with only so-so specs. It felt like a prototype, but the YotaPhone 2 does not. It’s a polished, remarkably thin handset with a design language all of its own – one that brings to mind Samsung’s curved Omnia devices of old.

At the very least, it’s comfortable. It’s also sturdy, and the curved edges mean it sits snugly in your hand, which is something you want in a phone designed to read books on. The YotaPhone team seem to have made few user interface slip-ups, with the power button in easy reach on the righthand side, and the nano-SIM tray even cleverly turned into the volume rocker. Yes, it lacks the glass polish of an iPhone or the aluminium of a HTC One, which you might expect for the price.

We’re slightly disappointed to see no option for a microSD card, but 32GB of in-built storage is a fair amount to be getting on with. This is a polished, mature product nonetheless.

The YotaPhone 2 has also seen a major upgrade under the hood. The quad-core processor gives the phone comparable performance to most flagship Android smartphones from 2014 (though you can likely expect upcoming models from HTC and Samsung to blow it out of the water), and we had no trouble running taxing games. A healthy 2GB of RAM makes multitasking a non-issue, and Android 4.4 KitKat has hardly been tinkered with. It’s clean and fast, with the standard operating system navigation buttons worked into the display, as Google prefers.

This phone really is a tale of two screens though. The primary display is flawless, in the same way almost any smartphone with a Full HD screen is these days.

The 5-inch AMOLED panel strikes the perfect balance between size and productivity for onehanded use.

Colours are vibrant, and with a 1,920 x 1,080-pixel resolution, it’s extremely crisp. Flip the phone around, though, and you’ll see what matters most about the YotaPhone 2.

There’s not a great deal to say about the E Ink display other than it’s crisp enough for reading text, reflects light like paper, and so long as you use it correctly, won’t drain the battery. (In fact, despite the relatively meagre 2,500mAh cell, the YotaPhone 2 can easily outlast a day of use.) It’s a much more comfortable experience for reading long documents on.

It’s also got some clever software smarts sewn in. As much as Yota has improved on the hardware with this model, really, it’s one software addition that makes this such an improvement: YotaMirror. This transplants your Android homescreen and all your apps to the E Ink screen at a long press and a drag of the Home button. Now you’re no longer restricted to YotaPhone’s select few apps: all of Android is available on the E Ink screen. You obviously won’t want to use this except during daylight hours or you’ll be struggling to see who texted you, but we cannot stress how awesome it is to use apps like Amazon Kindle or the essential save-for-later service Pocket like this.

Being able to read a print-like book and occasionally answer your emails or field calls from the same screen is a game-changer for those with long train commutes.

You’ll need to be careful what you do in YotaMirror mode, however. Anything that requires rapid refresh rates – which even scrolling through your inbox will require – will see the phone drain its battery even quicker than in AMOLED mode. You’re best sticking to reading in this mode (and set to page turn, not scroll, if possible), or the odd WhatsApp chat. You’ll quickly realise that games and videos are not meant to be watched this way.

The other use for the E Ink display is when you’re not actively using the phone. YotaCover rotates cover-screen photos every few minutes, without using almost any power. But if you’d rather have live widgets and the time showing, you can do that using YotaPanels, which features updating widgets for notifications, a calendar, music player and more. It’s great having all of these rolling in while your phone is locked, without any obtrusive screen glow or flashing.

There are a few other E Ink apps too, including a chess game, an RSS reader for news, plus Yota’s own e-book app, which isn’t really worth the hassle of importing files to if you’ve already built up a Kindle library.

Perhaps most worthy of note is YotaEnergy, which lets you tailor the energy-saving mode when your battery is low and even automatically transfer processes over to the less power-hungry E Ink screen, a unique advantage at a time when just about every smartphone has a power-saving mode.

YotaPhone’s also opened up an SDK so that developers can add more features to this mode, but you should probably brace yourself for the possibility that few will take up this offer.

You might have to accept that an Android 5.0 software update for this device could be a long time coming.

The potential lack of upgrades is something you should consider if your cursor is hovering over the ‘Buy’ button on YotaPhone’s website: this phone is what it is now, and possibly will be nothing more. It takes huge expense for manufacturers to update phones and create an ecosystem, after all.

Then there’s the price. And this is something you’ll need to think about carefully for a few reasons. First off, at £550, the YotaPhone 2 is an expensive device; you’re paying for the second screen here, not the specs, the looks or the build, and Apple ticks all those boxes for the same cost with the iPhone 6 and 6 Plus.

Secondly, you shouldn’t expect being able to subsidise this cost over a two-year contract like you might a big-brand smartphone. The YotaPhone 2 is being sold SIM-free only, with no network partners up front.

For that money, you could quite easily purchase a flagship smartphone and a Kindle, and still have change to spare. But what price would you put on convergence and convenience? If you are constantly reading and communicating on the go – and need some entertainment on a long commute – this might just be the best phone you’ve come across in years.

The YotaPhone 2 fixes almost all of the original’s flaws, and turns the rear E Ink display from an impractical cherry on top, to one of the phone’s main ingredients. There’s no denying this quirky conversation-starter is for a niche audience, and a rich one at that. We can’t wait to see what the YotaPhone 3 brings, not least a price drop for this model.