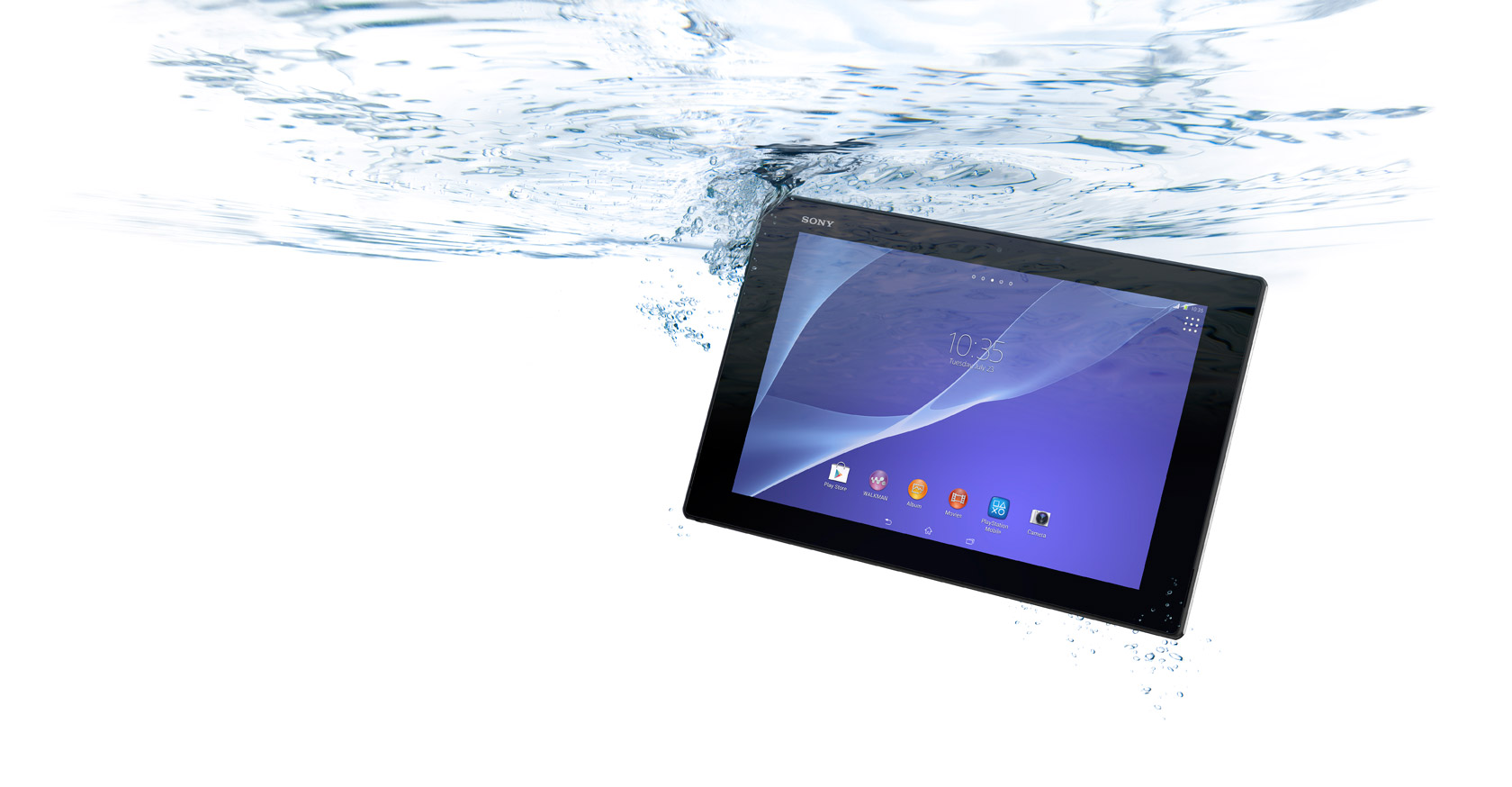 The Sony Xperia Z2 Tablet arrived with a fanfare of publicity about its light weight and supposed water resistance. Its uniqueness lies in its combination of sleek design and durability ‘ two factors that don’t often go hand in hand. But there’s more to the device than its innovative design. And there needs to be, if it’s to compete with lightweight rivals including the iPad Air and Samsung Tab Pro.

The first impression is of thinness: it has a mere 6.4mm depth. It’s also lighter than an iPad Air. So for travel, you won’t find a better tablet.

Much like its predecessor, the Xperia Z2 Tablet also continues Sony’s fascination with rigidly square corners. But reductions to weight and size come at a price: plastic has been used to achieve a lighter weight, which won’t be to everyone’s taste and prompts questions regarding its durability.

The Xperia Z2 Tablet doesn’t look like it can take rough handling by kids. However,the device’s size and weight make it ideal for tilt-control gaming, so children ‘ and adult gamers ‘ are going to love it. With an impressive IP55/IP58 rating (the standard for measuring resistance to dust and water), the Xperia Z2 will take a splash or two. It can function up to a 1.5-metre depth in water and you can take pictures in fresh water for up to 30 minutes. The 4G LTE connectivity adds to its appeal when it comes to outdoor use.

All the port holes on the Xperia Z2 Tablet are covered for water-proofing. The covers cannot be fully removed and look fragile ‘ as if they would break under slight pressure.

Another minor negative is the large bezel around the screen, which detracts from its relatively large 10.1-inch screen size, which is larger than the 9.7-inch iPad Air. Still, the display is more than sufficient for typical tablet tasks.

Elsewhere, the design is minimal. There are very few physical buttons, just the metallic power and volume buttons on the left edge. There’s an inconspicuous 2.1-megapixel front-facing camera, though the more powerful 8.1-megapixel rear- facing camera placed on the top right-hand corner is more noticeable.

Switch on the Xperia Z2 Tablet, and you can’t help but be drawn to its display, which doesn’t disappoint in either screen size, resolution or brightness. We would recommend turning off auto-brightness in the settings menu and cranking the brightness all the way up, as the Xperia Z2 Tablet looks better in all its colourful glory. Despite a lower screen resolution of 1,920 x 1,200 pixels than its competitor the Nexus 10, which boasts 2,560 x 1,600 pixels, the Xperia Z2 Tablet can still compete with its high-end counterpart. The display produces deeper-hued colours than standard LCD efforts and avoids the over-saturation of many AMOLED panels.

Sony has once again used its Live Colour LED technology, which adds red and green elements to each LED. This was first seen on the Xperia Z2 smartphone but it’s the first time it has been used on a Sony tablet. As a result, the screen’s vibrant display is more prominent when looking at colourful images or playing high-end games.

When reading online or simply web browsing, there is little to discern it from similar products, as the 1,920 x 1,200-pixel resolution has become the standard for most superior tablets.

Productivity apps include the Microsoft-aping OfficeSuite Pro software and a host of built-in apps that focus on connectivity and synchronisation with other Sony products.

It’s worth noting that certain large updates, such as an Android update, wouldn’t start unless the battery was at least half full, even when the device was plugged into the charger.

Also, many of the built-in Sony apps, including the PlayStation and PlayStation Mobile apps, required immediate updates. Perhaps a better method would have been to automatically update all the apps during initial set-up.

Other features include Sketch, which is an illustrator/image-editing app ‘ like a playful version of Microsoft Paint. It offers some decent functions but is pointless for any demanding creative tasks without a stylus.

Check out a screenshot that shows the vivid red hues of the Xperia Z2 tablet’s display below:

OfficeSuite Pro imitates Microsoft Office, right down to the icons, with the ability to create simple text, spreadsheet or presentation documents. The on-screen keyboard is fully capable of taking extensive notes. For more structured documents, however, tablets still cannot compete with a proper physical keyboard and trackpad or mouse ‘ even with an external plug-in tablet keyboard. And Microsoft’s Office software for Android is better for bigger productivity tasks. The on-screen keyboard’s magnifying glass and selection tools can be a bit glitchy when attempting to select or edit certain text. The on-screen keyboard also uses information from your other accounts ‘ Google, Facebook,Twitter ‘ to personalise the predictive text input to match your writing style. We didn’t notice any difference in the text that was being suggested by the keyboard while typing ‘ apart from its recognition of personal information such as email addresses.

A social network newsfeed aggregator entitled Socialife is included and is similar to Flipboard and HTC’s superior BlinkFeed. News aggregator apps are also now available from Facebook and Yahoo, with varying degrees of success. Meanwhile, the Xperia Lounge and Sony Select apps offer a host of audio-visual recommendations including video clips, selected movies and tracks.

Even if you’re not a gamer, it’s worth trying out the Xperia Z2 Tablet. Its light weight and thinness make it extremely easy to use for tilt-control games such as Real Racing 3, which worked a charm on the device. Playing online using a wi-fi connection was a breeze, and the decent-sized screen and vivid colour display made it all the more immersive. It really couldn’t be easier for new users to take to gaming with portable devices such as the Xperia Z2 Tablet.

The 2.3GHz quad-core processor makes both gaming and web browsing fast and satisfying. To put it into context, the Amazon Kindle Fire HDX 8.9 offers a slightly slower 2.2GHz processor and the Samsung Tab Pro 10.1 offers exactly the same chip as the Z2 (for more detailed info about the Z2’s main competitors see our specs rundown, opposite).

The speakers on the device aren’t the best but they’re above average. The same goes for audio while playing music tracks using the built-in Sony Walkman feature.

It’s hard to imagine any other mobile device beating the current crop of high-end tablets, that is, until the rumoured appearance of 4K tablets later this year.

The 8.1-megapixel camera on the Xperia Z2 Tablet is standard fare, though it offers the benefit of water resistance. But who takes photos with such a large tablet anyway? Especially when the camera is less powerful than a top smartphone such as the Galaxy S5 or even the Xperia Z2 phone.

Video is also a standard 1080p resolution and 30 frames per second. As is the case with many of the additional functionalities and in-built tools on the Xperia Z2 Tablet, it’s a case of it’s better to have than to have not.

An innovative design and water and dust resistance make the Xperia Z2 Tablet worthy of your attention. While the display is impressive, the screen’s resolution is beaten by the Samsung Galaxy Tab Pro 10.1 and Amazon Kindle Fire HDX 8.9. Its powerful processor is slightly faster than Amazon’s rival tablet and boosts performance when gaming, using apps and web browsing.

Other functions including the standard camera and video playback are pleasant additions, but they offer little new. It’s a solid all-round tablet and while the same price could buy you a better display, its sleek design is a market leader.

If looks could kill, Sony just murdered the competition. Add to that a powerful processor and decent screen size and you have a great new addition to the high-end tablet market. 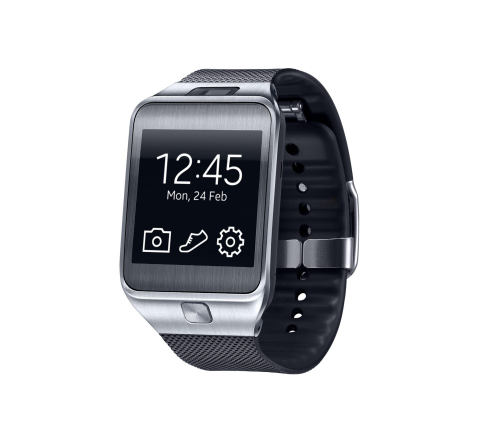 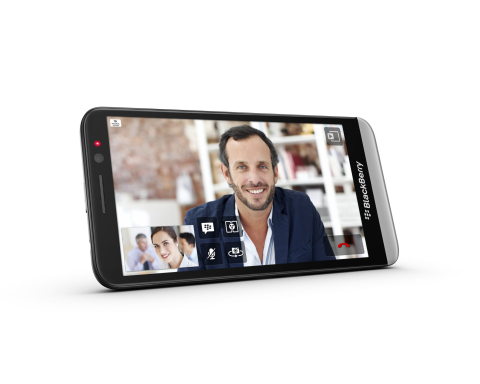