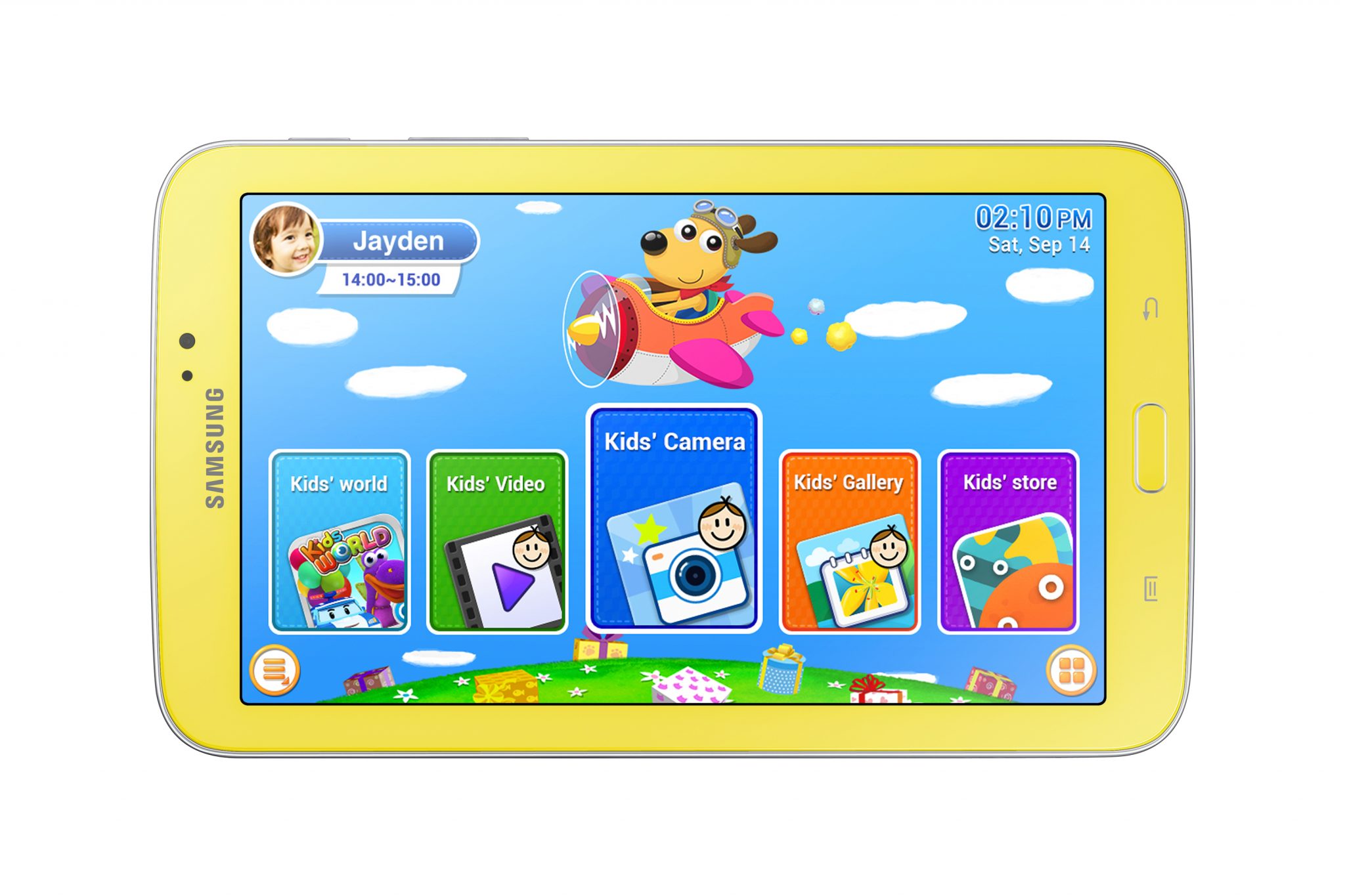 We can see Samsung’s train of thought here. The Korean giant has made devices for the mass market, the budget crowd, sporty people, camera fanatics, phablet lovers and many, many more. So what demographic does it have left to cover? Children, perhaps the most lucrative market of all.

Enter the Samsung Galaxy Tab 3 Kids. Does the name sound familiar? It should, as this is a simply a rebranding of the Galaxy Tab 3 7.0, the company’s answer to the likes of the Nexus 7.

So what’s changed? Not a lot when it comes to the hardware and design, but the Tab 3 Kids completely rejigs the Android operating system for younger users. It’s got enough cutesy animals and bright colours to bring in any child from the ages three and up (Samsung’s words recommended age range), but isn’t that a little too young for a hi-tech tablet?

The Tab 3 Kids is indistinguishable from the standard Tab 3 7.0. That is to say that it’s an attractive mini-tablet with a simple design. This particular model is coloured a pale yellow which helps is stand out from the usual black and white devices for older markets.

However, if you’re making a device for a younger generation, it’s probably not a good idea to stick to the Tab template. It has the same dedicated home buttons placed at the bottom of the device, which wouldn’t mean a thing to a younger user. It feels like a missed opportunity that Samsung hasn’t completely refreshed these aspects to be more appealing to children.

Meanwhile, competing tablets from the likes of Vtech and Lexibook all get it right. Their bright, colourful designs make the tablet look a lot more like a toy, which is ideal for younger children. To that end, at least the company chose to adapt the small 7-inch device rather than one of its more costly, bigger tablets.

The Tab 3 Kids’ design might be identical, but the software is unlike anything you’ve seen before on a Samsung device. Google’s Android 4.1 Jelly Bean OS is in use here but it’s been heavily modified with younger audiences in mind. The standard home screen has been transformed into a cartoonish menu. To select apps you drag your finger across the screen to scroll through a list of big icons.

It’s easy for older audiences to see through the disguise ‘ this is simply the Android OS with a lot of pre-installed apps, but it’s been well thought out. Normally we’d frown at the amount of bloatware, but in this case apps like the Dolphin Readers, which teaches kids to read, are really beneficial and the main selling point of the tablet.

Even the store on the Tab 3 Kids is different. Instead of simply linking to the Google Play Store, Samsung has smartly created its own storefront with a selection of games and apps aimed at younger users. It’s similar to how Amazon limits apps on its Kindle storefront, but actually makes more sense here, as you’ll avoid kids downloading potentially nasty apps or spending all of your money on exploitive software.

Out of the box there are 14 apps to play with. The stock Android apps are nowhere to be seen ‘ but Samsung has created child-friendly versions of some of them such as for the camera. The company has had a bit of fun with its own tech here, allowing you to place crowns, bows and tiaras on your head with the sensor’s face recognition.

All that said, don’t expect to simply unpack the tablet and hand it straight over to your child. There are some barriers Android has in place that Samsung hasn’t been able to get around. Setting up to device for the first time is just like setting up any other Android tablet. In other words, it’s impossible for a child to manage on their own. The same goes for some of the usual settings like Wi-Fi connections and Bluetooth.

We also have to question Samsung’s commitment to the product itself. Sure there are plenty of apps available and many more will come, but we’d be more inclined to trust a brand that has dedicated itself to this market full-time. With the company’s focus split in so many directions, it might be wiser to do a bit more research and find a tablet that’s from a company that specialises in this age range, rather than one that’s testing the waters.

We doubt that there are too many kids out there that are looking to push the Tab 3 Kids’ hardware to its limits. That said, the dual-core 1.2 GHz processor is more than capable to running anything that’s available on the store. Apps will open within just a second of pressing on them and run smoothly with no crashes or other such issues.

Fitted to the back of the device is a 3 megapixel camera which will suit the needs of any child just fine. It’s identical to that of the Tab 7.0. Were we reviewing that tablet we might complain about the grainy images the camera gives off under dim lighting but that isn’t going to be much of an issue for younger users who will just be happy to have a camera at all.

It can also record video to the same satisfactory standard. Kids also have 8GB of space to play around with, so there’s plenty of room for recordings and snaps.

Perhaps the most impressive feature of the Tab 3 Kids on the specs front is the 4000 mAh battery, which keeps the device going for over a day of constant use of apps and games. We used the tablet over the Christmas period at one point in which it went untouched for around a week and still had 10 percent of its battery life remaining. It takes three hours for the battery to then fill itself up again.

Seeing as it’s aimed at children the Tab 3 Kids manages to get around our usual expectations. It doesn’t need the best camera or the fastest processor. In fact, with that market in mind we’re surprised that Samsung has kitted out the device as much as it has. It has everything the younger market could possibly need and a lot more, thanks to the great built-in apps.

Still, we question whether a device that takes the form of a premium Samsung tablet for a younger market should exist. We certainly wouldn’t recommend handing one over to a three year old unless they’re using it with an adult by their side. We’ve also come across similar devices that undercut this tablet’s £150 price but a good margin. This is by no means a bad effort from the Koreans, but it might have slightly misjudged its market.