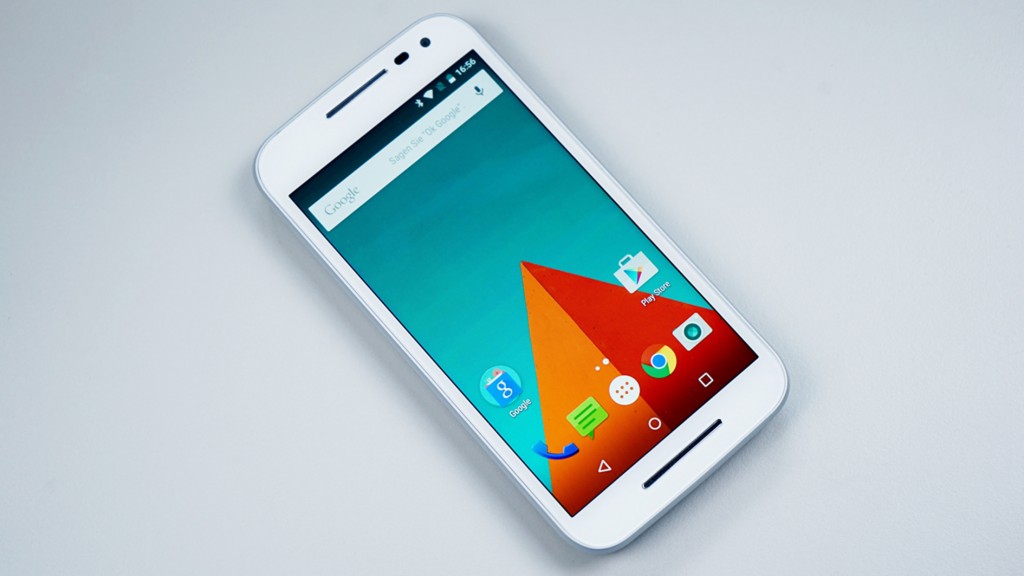 If you cast your eyes back to the Motorola Mobility event that happened in July this year, the company announced a flurry of new devices covering both budget and flagship price-points. The Moto G represents the former end of the spectrum, costing just £150 from most online retailers. As the third iteration in an already successful legacy, it has some big expectations on its shoulders. Thankfully, the company has continually improved the device and it remains a competitive handset. We have high hopes for the third version and expect it to be no different.

If you’ve seen the second generation Moto G, chances are that this one will be very familiar to you. The design aesthetics are very similar and you’d be forgiven for thinking it was the same device if viewed from the front. It has the same black or white monolithic appearance, with the polycarbonate material doing little to truly make it stand out. Moto Maker makes a triumphant return, allowing complete customisation of the materials. Oddly, the stereo speakers that were included in the second gen version are now gone. Only one of the two giant front grilles now operates as a speaker, with the other mainly being there for show. I’m not quite sure why Motorola has chosen to remove this, as it was a nice feature on the previous Moto G. Still, the added bonus of full waterproofing is a welcome feature that makes up for this.

On the rear, there’s a couple of subtle welcome changes. The grippy matte finish on the original Moto G is gone and has now been replaced by a textured rubber which feels even more secure in the hand. This is definitely one of the most snug devices I have ever held and it fills me with plenty of re-assurance that it won’t slip out of the hand like butter. There’s also a new piece of contrasting plastic trim which surrounds the sensor, with the familiar Motorola logo proudly embossed into it just underneath. The single LED flash has now been replaced with a dual LED variant, which should help to illuminate those low-light shots a little better. It also has an excellent weight to it with near-perfect distribution across the device, making it feel remarkably rugged and secure in the hand.

On the right hand side you’ll find the volume and power keys, which again have a very similar feel to the ones on the previous Moto G. Sturdy and with minimal travel, they should be able to stand up to a fair amount of abuse in the coming years. The rear case is removable, revealing a sim tray and microSD slot only. The battery lies inside the device and cannot be replaced, which is a real shame considering this was one of the main annoyances surrounding the second gen version.

The Moto G has what could be the best rear camera at this price-point. With a 13 megapixel sensor, it already beats most other comparative devices on the market, though it’s the image quality that really sets this thing apart. Colour reproduction is outstanding with a real sense of vibrancy to each image. Shots are also well exposed in bright conditions and the software does a good job of adjusting to its surroundings. Low-light shots are also impressive, though the insistence on using the built-in flash can produce harsh images in certain conditions.

For such a great camera, we were disappointed to find a lack of manual controls. We understand that this is marketed at the type of users who may not necessarily need such tools but it would’ve been nice to see more than just two basic controls. This is a quality sensor that cries out for deeper controls and we urge you to take advantage of the new Lollipop camera API and download a dedicated third-party application like Camera FV-5.

Besides the front camera, the new Moto G is also equipped with an equally good front camera. The 5 megapixel front sensor does a good job of taking selfies with little noise in all but the darkest of conditions. Detail is well retained with little in the way of artefacts or crosstalk; something of a rarity for front camera sensors at this price-point. 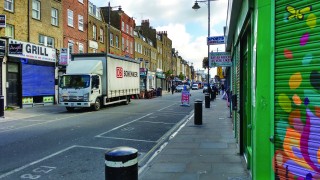 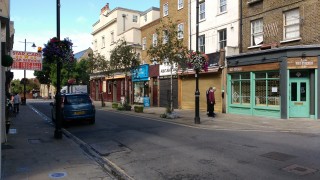 The Moto G third generation carries a 5-inch IPS panel with a resolution of 1280 x 720. This equates to roughly 294 pixels per inch, which is just shy of the minimum print standard. Pixilation is never really evident even when viewed at close distances and colours are well represented with plenty of vibrancy. Viewing angles are excellent, with the screen perfectly viewable with no distortion even at the most extreme angles. Maximum brightness is acceptable, with enough illumination to make it viewable under reasonably bright conditions. Those under direct sunlight are likely to struggle however.

Like almost every smartphone at this price, the new Motorola Moto G uses a Qualcomm Snapdragon 410. This is a jump up from the previous generation, which used a Snapdragon 400. An overall PassMark score of 2976 sits in the higher tier of devices powered by said chip, despite only having 1GB RAM. The included 8GB of internal memory in our review model was tiny, with the Android OS using roughly a fifth of the overall space. Memory cards cost nothing these days so it’s hardly a huge issue, though you’ll definitely be relying on expandable storage in the long-term.

Playing Asphalt 8: Airborne was a surprisingly smooth experience considering the low-end Snapdragon, with high settings only introducing a subtle frame-rate drop. While it wasn’t buttery smooth, it was most definitely playable. It was only on the more visually intensive levels where things got a little slower and even then, it was hardly game-breaking. This is surprising considering that other devices with similar hardware often struggle on the higher settings.

Running a near-stock version of Android 5.1.1, the user experience on the new Moto G is both smooth and fluid. Motorola has carried across the Moto app which first debuted in the Moto X. It includes most of the features found in the original and they’ve been tweaked to work better with the newer hardware. The ‘Places’ feature is fantastic and quickly adjusts notification sounds according to your location. ‘Actions’ allows gesture control of the device through various motions, such as making a chopping motion to turn the flashlight on. The final feature in the Moto app is ‘Display’, which operates as a glance function for notifications. The amount of detail shown on the lock screen can be completely customised, giving complete control over the amount of information you wish to see.

The battery on the new Moto G is 2470 mAh, which is above average for this price-point. Our battery drain benchmarking test measured a respectable 7 hours 31 minutes under constant use, which is a good result. In real world scenarios, I was easily able to make it through a day of moderate use before I had to reach for the charger. The phone doesn’t have a removable battery, which means you’ll need to lug around a powerbar if you want to go on any overnight trips.

Budget handsets rarely have the consistent experience which the Moto G offers. You’ll struggle to find a device at this price-point with a better camera, while the battery life is more than enough for most users. Motorola’s continued use of a near-stock Android experience keeps things running smoothly and the included Moto app manages to be more than just a gimmick. While the tweaks are most certainly subtle, it remains one of the best budget Android handsets that money can buy.

More Stories
Sony Xperia Z5 Review
[highlight color=#336699 ]Introduction[/highlight] The mid-phone in Sony’s flagship Xperia Z line looks a little bit similar on paper. Can it do enough to differentiate itself from its predecessor? When Sony announced their three new smartphone devices at IFA this year, the response was a little muted. Not only did they look the same, they also […]
Devices - Thomas Wellburn
Samsung Galaxy Tab S2 Review
[highlight color=#336699 ]Introduction[/highlight] Samsung has once again graced us with another flagship tablet but how does it compare to this year’s competition and more importantly, its predecessor? Samsung are at it again with another sleek tablet that will surely fly off shelves and please fans. The company was the first to release an Android tablet […]
Devices - Manny Pham
Apple iPhone 6s review
[highlight color=#336699 ]Introduction[/highlight] Apple’s interim ‘s’ phone reaches its sixth iteration, but can it be more than just a precursor to the inevitable iPhone 7? Is it that time again already? Every September for the past few years, Apple has chosen to hold an event which focuses around the launch of new iPhone device. This […]
Devices - Thomas Wellburn