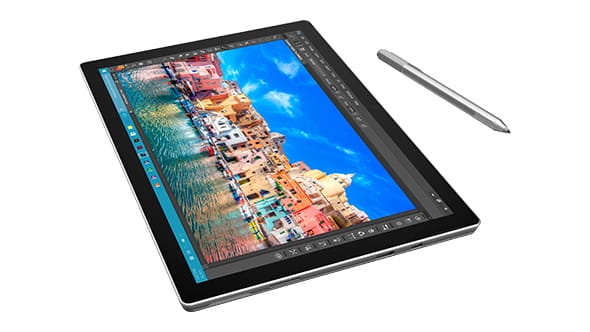 Microsoft’s revolutionary Surface line reaches its fourth incarnation, but just how much has it changed over the already excellent Surface Pro 3?

What a long way Microsoft has come with its Surface line. The initial concept was scoffed at by some critics, yet that didn’t stop the Redmond giant from beavering away at each little flaw and slowly sculpting it into the beast it is today. Surface VP Panos Panay claims that the laplet line now has a customer satisfaction rating of 98%, which is a hell of a claim to make for any product. With the fourth iteration now firmly in our hands for testing, can it really offer that much different over the already great Pro 3 and keep up the momentum? Let’s find out.

The Surface Pro 4 is very similar to its predecessor the Surface Pro 3, which received a significant revamp over the Surface Pro 2. What you get is that same all-metal finish with a hulking Microsoft logo on the rear, replacing the more subtle ‘Surface’ writing that adorned the earlier model. Overall footprint is the same in terms of lateral dimensions, but Microsoft has somehow managed to shave a further 0.3-inches off the thickness. Heat vents around the edges of the device remain, while the volume controls have now been moved to the top edge so they don’t interfere with the pen placement. The Surface employs a new and stronger magnetic pen mechanism that allows you to store the stylus simply by snapping it onto the edges of the tablet.

Connectivity is also the same as the previous generation, with just enough ports to make it useful but not much else. The inclusion of only a single USB port on the hardware itself is once again a bit of a disappointment, though Microsoft has included one on the charging brick for good measure, even if it’s only really useful for charging your smartphone. The mini DisplayPort connector is back, this time supporting 4K at 60Hz thanks to the new and improved Intel Skylake processors used in the device.

Also shipping with the Surface Pro 4 as an optional extra is the new and improved Type Cover, which Microsoft has improved on nearly every aspect of the awkward original. The new chiclet keys on the new model which feel so much better for typing. There’s also a much larger glass trackpad that actually works this time round, unlike the tiny matted one you got on older versions. Those who own the Pro 3 shouldn’t worry either, as it’s fully backward compatible with your devices too.

The rear camera on the Surface Pro 4 is not the main focus of this device, so we weren’t necessarily expecting mind-blowing quality. At 8 megapixels, it sits at the top of the tablet spectrum for sheer resolution but as we know, pixel counts are not everything. Nevertheless, the pictures produced are actually quite decent for a tablet, with usable daytime images on the whole. Low-light is a write off, with the tablet completely failing in our darkest test. This is hardly surprising however considering most others do the same.

The 5 megapixel front camera is more interesting, incorporating Windows Hello for some very cool instant login capability. Next to the physical camera sensor itself is a second infrared imaging sensor that is used for scanning the room. During the initial setup of Hello, Windows will ask to take a profile of your face and from there it’s all pretty straightforward. Simply look into the camera when you see the login screen and if all goes well, it should recognise you.

A major highlight on the new Surface Pro is the display, which boasts the highest pixel density rating of any device in its category. Microsoft increased the resolution to a mind boggling 2736×1824, which equates to a class-leading 267 DPI. At 12.3-inches, it’s also bigger despite the overall device taking up the same footprint as the original. Microsoft achieved quite a feat with the new Surface Pro 4 by reducing the optical stack to just 0.4mm, meaning the actual panel is closer to your finger than ever before. They’re calling the new technology ‘Pixelsense’ and it works in tandem with a dedicated custom G5 chip which analyses pen movements and controls latency. Put it all together and you have one of the most natural writing experiences we’ve ever felt on a tablet.

After calibration, there was little difference in the before and after. That’s because this panel has one of the most accurate colour readouts we’ve ever seen, with only a slight blue bias that is virtually impossible to see. For professional users who primarily work on digital content, it represents the sRGB colour space better than any mobile device we’ve ever tested. It’s a highly commendable feat of engineering from the calibration guys at Microsoft. It’s also got one of the highest contrast ratios ever recorded, at a whopping 1406. Reputable screen testing website Displaymate said that it was one of the best mobile tablet displays they had ever tested. This stellar result continues with outdoor readability, with a high maximum brightness that allows it to be read in most lighting conditions.

Being a fully-fledged Windows 10 tablet with laptop level components, it’s a little unfair to compare this with the traditional tablet. As such, we’ve decided to test this much like you would a laptop, with true X86 benchmarking tools for an honest comparison. Intel’s new 6th generation Skylake CPU’s are the weapon of choice for the Surface pro 4, with the chips being a significant jump over the older 4th gen processors used in the Pro 3. They mark the first time Intel has transitioned to a 14nm manufacturing process, meaning less heat emission and power consumption. Our model shipped with the i5-6300U processor and 8GB RAM, which is the mid-configuration of the bunch.

Doing a round of PCMark 8 tests showed promising results. It scored 2572 in the work benchmark, 2478 in the creative test and 2415 in the home trial. This bested the previous generation Surface Pro 3 in all categories by quite a margin, once again showing the prowess of that new CPU. 3DMark 8 scores were almost double that found in Surface Pro 3 across the board, another excellent result for the new Skylake chipset. Gaming performance was generally okay but we’d hardly call it a strong contender. You’ll be able to play some Steam games at native resolution, however the quality settings will need to be crushed as a result. 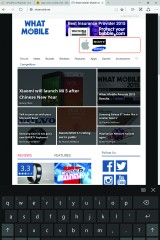 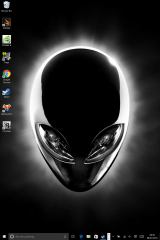 The Surface Pro 4 marks the first in the range to ship with Windows 10, which is a major overhaul of the marmite Windows 8 OS. It’s still doesn’t have the conventional menu that Windows 7 users will be used to, pushing users to utilise Cortana and the search functions to find their programs rather than system folders. The Metro Start screen from Windows 8 now resides in the start menu itself, with all your applications along the right-hand side of the panel. They’re fully adjustable and removable, so if you’d rather not use them you can simply unpin then from the start menu to get a more old-school feel.

As mentioned earlier, Cortana has been carried across from Windows 10 Mobile in largely the same form as before. You’ll be able to use her for quick searches and speech communication, while also managing your calendar, making appointments and getting a daily overview of your schedule. Continuum is also on full show and acts as Microsoft’s answer to a one-size-fits-all operating system. With the ability to dynamically change the interface depending on what device you’re using, it’s an impressive accomplishment that mostly works effortlessly. Teething bugs aside, they’ve managed to smooth out a lot of the random crashes and hanging issues that plagued it initially at launch. When you remove the type cover, it just works. 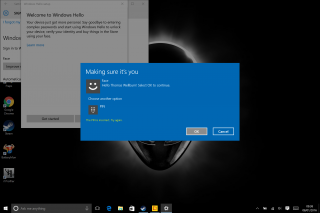 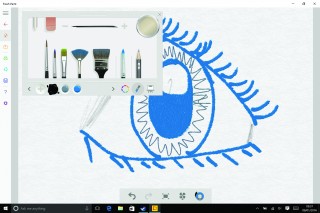 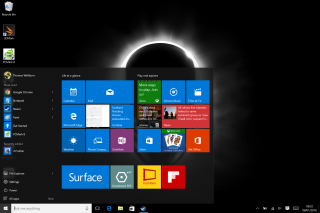 The 5,087mAh battery on the Surface Pro 4 is roughly 10% smaller than the 5547mAh version found in the previous version, which is no surprise since the device is slightly thinner. Still, with the more power efficient Intel CPU’s we didn’t expect there to be much of a difference between the two. Our predictions were proved correct, where we got around 5-6 hours of casual use browsing the web and watching videos. It’s hardly a stellar result but it’s better than the Pro 3, which lasted around an hour less in general testing. Gaming and intensive tasks sapped the battery pretty heavily, with just over 2 hours of life from a full charge. This is well short of the best tablets on the market but hardly unexpected, especially when it is running a higher tier Core i5.

Obviously, we think it goes without saying that the battery on the Surface Pro 4 is non-removable¦ So don’t even bother trying to pry this thing open and swap it.

A much improved screen with better touch and response are the biggest changes to the Surface Pro 4, with enough clout to sway it for many potential buyers. Factor in all the other little things that Microsoft has adjusted for the better and it becomes clear that this is much more than just a fresh pair of eyes. While it won’t hold up to the strenuous design tasks unless you opt for the top i7 (which is incredibly pricey¦ and it’s still only two cores), most end users will be more than happy with its chameleon-like ability to act as both a powerful tablet and a decent laptop. If it’s portability you’re after, look no further. Just don’t expect it to be cheap. 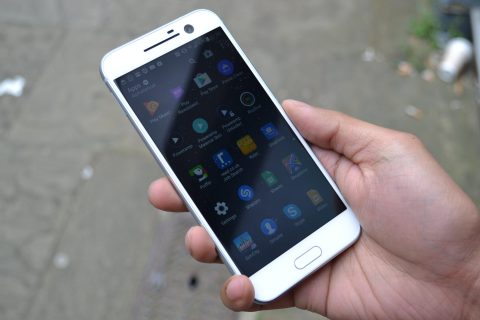 HTC 10 Review – A Massive return to form
[highlight color=#336699 ]Introduction[/highlight] HTC had a rough time with the M9 despite it being a pretty decent handset. Can the new HTC 10 stand out in a crowded market? It’s no secret that HTC has struggled over the past couple of years. Sales have gone down and analysts were predicting doomsday scenarios for quite a […]
Devices - Thomas Wellburn
Apple Watch Review: the undisputed smartwatch for the iPhone
[nextpage title=”Introduction” ] Apple has finally entered the wearables game. Ladies and gentleman I present to you the Apple Watch. The best smartwatch for the iPhone.  We’re still trying to work out whether we actually need a wearable in our life. A wearable above all should be an extension of your smartphone device, helping you to look […]
Devices - Manny Pham 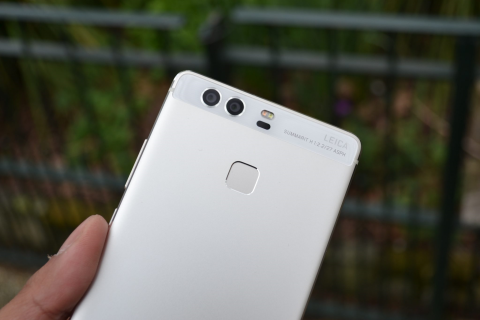 Huawei P9 Review: we Leica this flagship killer
[highlight color=#336699 ]Introduction[/highlight]   Huawei are getting ever so closer to joining the big boys table, the Huawei P9 is their most recent effort with a kicker. It has a dual-camera system co-engineered by Leica. Huawei is not in league with Samsung and Apple just yet, but the P9 is a cut above in the second […]
Devices - Manny Pham 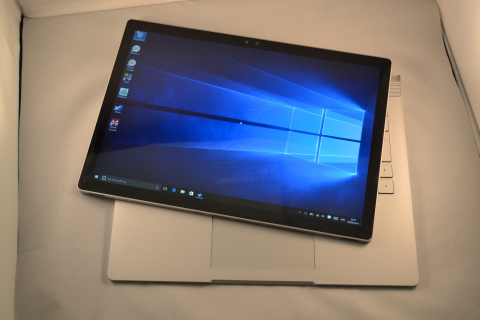